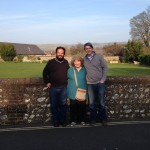 The life of Mississippi hill country bluesman Mississippi Fred McDowell (1904–72) is the subject of a documentary film being made by Scott Barretta and Joe York. The idea for the film came about when the two discovered that the University of Mississippi owned a short film about McDowell called Bluesmaker, which was made in his longtime home of Como by Christian Garrison, who was a resident filmmaker for the university.