Students, faculty, staff, and alumni of the Center for the Study of Southern Culture had films that were shown in the 2022 Oxford Film Festival held this past weekend. We are pleased to congratulate alumna Christina Huff who won the Best Student Short Film Award for her film “Slade Kyle,” and John Rash of the Southern Documentary Project who won Honorable Mention in the Best Mississippi Short Film category for his film  “Sam Wang: Centripetal Persistence.” 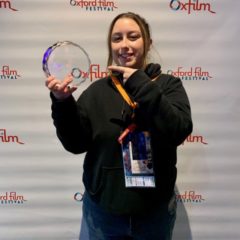