The world premiere of “Voices of Mississippi,” a multimedia production chronicling some of Mississippi’s most iconic people and art, will kick off the 2021-22 performance season at the Gertrude C. Ford Center for the Performing Arts at the University of Mississippi.

The multimedia event, set for Sept. 14, celebrates the people and art of the rural Southern blues, gospel and storytelling traditions. It is based on and inspired by the acclaimed 2019 double-Grammy-winning four-CD box set,”Voices of Mississippi: Artists and Musicians,” documented by historian William Ferris.

Ferris, founder and inaugural director of the UM Center for the Study of Southern Culture, will host the program, which begins at 7:30 p.m.

“‘Voices of Mississippi’ was to have been premiered last year at the Lincoln Center, but COVID interrupted those plans,” said Julia Aubrey, Ford Center director. “Since the university had the connection to Bill Ferris, we were tapped to present the inaugural event at the Ford Center.”

Featured musicians include Cedric Burnside, recent recipient of the prestigious National Heritage Fellowship from the National Foundation of the Arts; Sharde Thomas, and Luther and Cody Dickinson of the North Mississippi Allstars, all of whom are descendants of artists documented by Ferris.

The program features live musical performances integrated with film, audio recordings and rare photographs captured by Ferris. Beyond the performance, the Center for the Study of Southern Culture is providing academic framework for the event.

“The center, also home to Living Blues magazine, will feature in our Gammill Gallery covers from throughout that publication’s 50-year history,” said Afton Thomas, associate director of programs for the center. “The day before the show, on Sept. 13, we are co-sponsoring Dr. Ferris’s appearance on ‘Living Music Resource (Live).’

“In the lobby of the Ford Center, those who attend ‘Voices of Mississippi’ will find a display of photographs from one of Bill’s other books, ‘Give My Poor Heart Ease,’ on loan from the center.”

Collaborating with the Ole Miss Department of Music, Burnside and Thomas have agreed to schedule a master class workshop with music students for Sept. 15.

“With a broad array of photos, film clips, stories and live music, ‘Voices of Mississippi’ paints a powerful picture of a unique time and place that remains an essential piece of the American cultural fabric,” said Charles Dreibe, manager of Blind Ambition Management, which is coordinating the event.

“From the 1960s through the 1990s, he (Ferris) captured an invaluable archive of cultural and musical treasures, and much of that art and humanity will be shared in this unique concert experience.”

A historian with an egalitarian lens, Ferris studied Mississippi as a slice of humanity in which everyone and everything was interconnected – and in which the beating heart of broader cultural traditions could be found in overlooked figures and places.

“Because this is an important event for the state, we hope to attract student groups from across the region,” Aubrey said. “This is an exciting project that resonates across campus and, we hope, throughout Mississippi.” 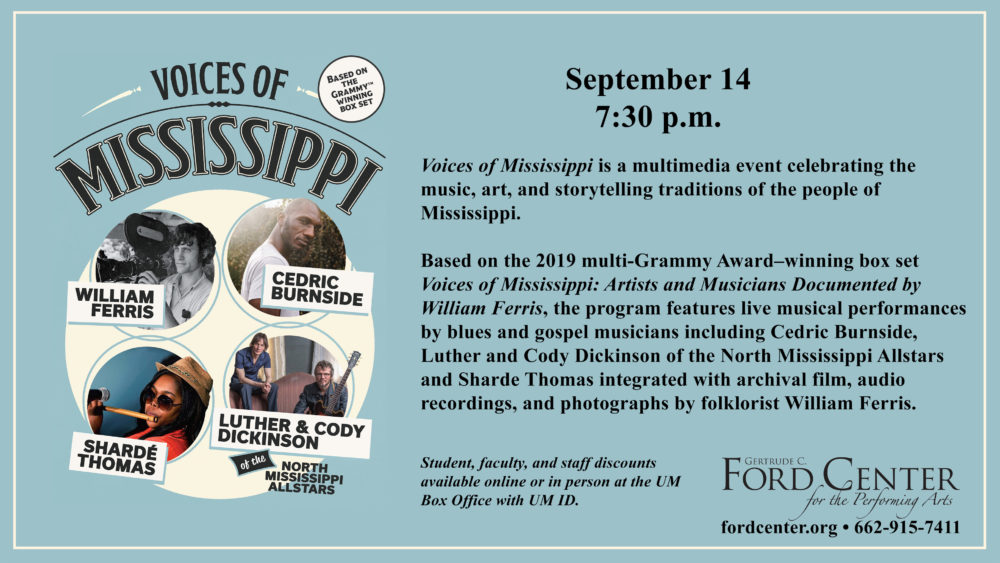