“When I want to feel better, I drive down Summer Avenue. There I can see the past,
present and future diversity and humanity of Memphis.” 1

I discovered Summer Avenue—a commercial district in Memphis, Tennessee—while working on an oral history project in 2016. I was interviewing Latino restaurant owners, workers, and other residents to document their experiences living and working in the Mid-South. During this project I became familiar with a concentration of Latino-owned restaurants on Summer Avenue. I began patronizing these businesses, sampling different types of Venezuelan, Colombian, and Mexican cuisine.

However, it’s not until the Summer Avenue Merchant’s Association (SAMA) began an effort to brand Summer Avenue as the first international district in Memphis did the area renew my interest in 2019. Summer Avenue and the surrounding community have been shaped by movement and migration. The automobile industry is connected to Summer’s early growth, and the integration of Memphis schools in the 1960s led to white flight, an interviewee was quick to point out. The area went through a period of decline, but immigrants moved in and settled in the residential communities surrounding Summer Avenue. In time international businesses started to populate the strip, contributing to the revitalization of the area. 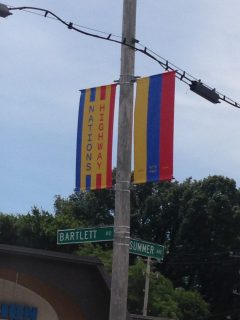 Summer Avenue has gone by a number of names over the years: US Highway 70, The Broadway of America, Bristol Highway, and Nations Highway. US Highway 70 was completed in 1927, and was one of the first paved signed highways across the country. From the early 1920s through the 1950s, Summer Avenue grew due to the needs of the growing automobile industry and the needs of travelers. The increasing affordability of automobiles for family transportation changed the design of Memphis and other American cities, “People and businesses began to move away from traditional city centers relocating in outlying districts, often around major new highways.” 2
The 1930s was deemed “a golden era for the booming motor court industry,” and by the 1940s and 1950s Summer Avenue was lined with drive-in restaurants, motor courts, gas stations, and shopping facilities. The first Holiday Inn in the US opened on Summer as well as the city’s first McDonald’s. However, according to one report, “Interstate 40 eventually came through the city creating a quicker alternative to get to Nashville and beyond. That alternative to Summer Avenue played a role in taking the city’s attention from the street.” 3

Summer Avenue and the surrounding communities went through a gradual decline in the 60s and 70s, which my interviewees associated with the integration of schools and white flight. Other reports claimed that, “Summer Avenue began to decline in the 1970s, and less desirable businesses like title loan services and the infamous Admiral Bebow Inn set up shop.” 4 By the 1980s, I was finding articles in the archives where local residents and business owners were launching complaints about Summer Avenue’s nightlife and the youth presence in the parking lots of businesses and shopping centers. According to the resident manager of the Southland Mall, Dallas Gatewood, “the mall eventually had to take steps to keep people off the parking lots after store closing hours. He said before the mall began to discourage the practice, on some nights 200 to 300 youths were gathering after hours.” Fast forward to the contemporary moment and the international presence on Summer Avenue and in the surrounding communities demands attention:

The schools and neighborhoods along Summer are changing as rapidly as the languages on the business signs…The most popular foreign language at Berclair Elementary is English. Six in 10 students are learning English as a second language… Members of Kingsbury’s soccer team speak 17 languages. About 1 in 5 Kingsbury students are immigrants or refugees from two dozen countries…Nowadays, Bell Plaza has a more international clientele. There’s Botanica Milagroso, which offers a variety of folk medicines and Latin American religious implements. Edo Japanese Restaurant, whose sign is in English and Japanese. Jerusalem Market, whose products include halal meat, or meat that is allowed under Muslim dietary restrictions. “Dear customers,” a sign on the market’s door reads in English and Arabic, “only on Fridays the store will be closed from 1 p.m. to 2:10 p.m. because of prayer time.” 5

During the summer of 2019 I began ethnographic fieldwork on Summer Avenue, conducting interviews with restaurant owners and other merchants, gathering archival materials, and participating in the initiatives of local non-profit organizations to familiarize myself with Memphis’ immigrant population. I became interested in documenting the history and transformation of Summer Avenue and the surrounding communities due to changing residential patterns, the influx of newcomers and their families, and the growing presence of international businesses. I spoke with individuals from Morocco, Yemen, Thailand, and Palestine, and became a regular at their restaurants and businesses. As I began reading about Summer Avenue in the mainstream media, I couldn’t help but notice how often the culinary diversity of the avenue was mentioned. Summer was described as an “ethnic culinary hub,” a “near endless source of ethnic cuisine,” “the city’s most diverse destination.” “Some say you can eat around the world in less than three minutes in that area,” wrote journalist Tom Dees, “There are about 30 to 50 cultures represented in the stretch of Summer avenue between Highland and White Station.” 6 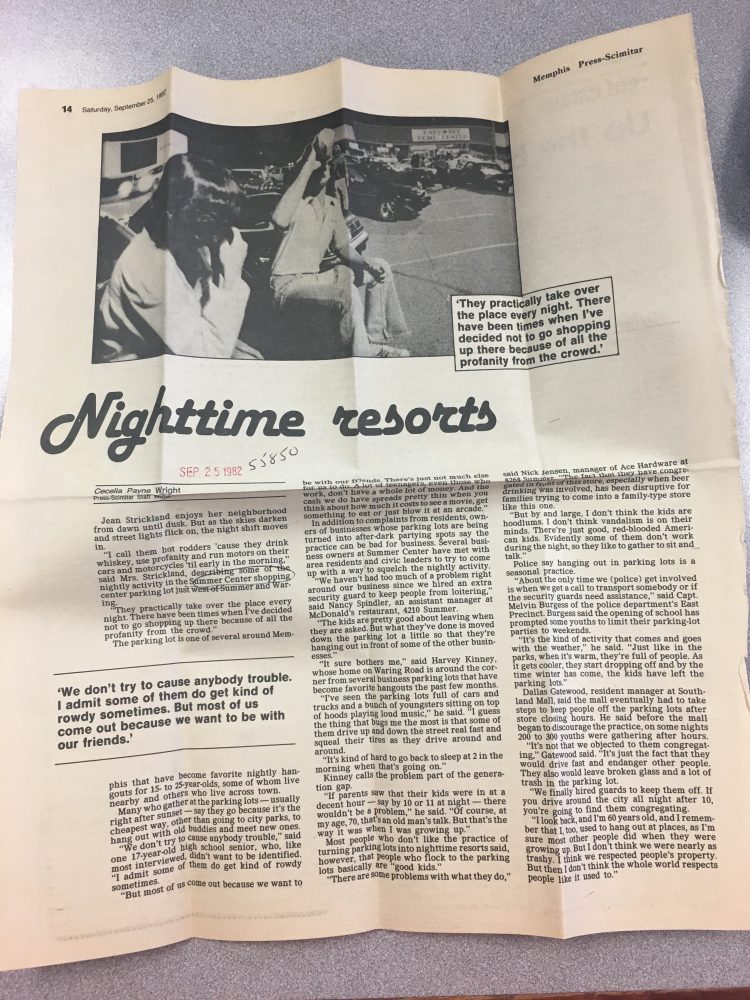 Resident and local historian Jimmy Ogle also commented on the international presence: “If you go north of Summer you see a lot of Hispanic neighborhoods and that business comes to shop on Summer and you now see a lot of international restaurants,” Ogle said. “It’s probably the most international street we have in Memphis. You could probably find 12 to 15 nationalities in restaurant options between East Parkway and the Interstate…Over the years, its naturally been a melting pot, a magnet for businesses to open.” 7

Through my research, I examine how migrants are incorporated into the social, political, and economic life of communities that were non-traditional destinations of migration. Memphis is a city with a history of segregation and a historic black-white racial binary. These businesses are the visual markers in the landscape that signal the internationalization of Summer Avenue. Still, there are challenges to incorporation that continue in the current anti-immigrant political climate. At the moment, business owners are trying to navigate the coronavirus pandemic and in time we will see the effect that the current situation has on the businesses along Summer Avenue, Memphis’ international commercial strip.