Although the year 2020 seems futuristic in and of itself, faculty at the Center for the Study of Southern Culture are looking beyond the present with a scholarly eye to the next 20 years and more.

The Future of the South initiative focuses on the contemporary region and shapes conversations about how it will evolve using innovative approaches to studying the South within the context of the nation, hemisphere, and the globe. Programming in this designation has three elements: the topic has a presence in the curriculum, it figures prominently in the scholarship of at least one Southern Studies faculty member, and it extends itself to a form of community engagement for a broader audience.

“We hope it’s a way for faculty to lift up their own interests and share them with broader audiences,” said Katie McKee, director of the Center and McMullan Professor of Southern Studies and Professor of English.

Several programs are set for this spring.

“The first Future of the South focus we have is movement and migration into and through the United States South,” McKee said.

Simone Delerme, McMullan associate professor of Southern Studies and Anthropology, came up with the movement and migration concept.

“Simone’s idea has each of the three components: a classroom presence, a role in her scholarship about Latinx migration, and a public leaning community engagement piece which culminates in the fall with the Hostile Terrain 94 art installation.”

“We will be examining the interconnections that link people and nations economically, politically, and culturally to understand how powerful global forces are shaping local realities and conditions in a variety of southern states,” Delerme said. “Additionally, we will look at the historical antecedents to the current phase of globalization to examine longer historical connections, similarities, and differences between past global exchanges and the most current forms. Each week’s readings will evoke a series of critical questions about place-specific politics, social experiences, and economic relationships in the U.S. South.”

One project the class will work on is documenting the migration of Vietnamese refugees to Memphis, Tennessee using a series of articles from the archives of one of the Shelby County public libraries.

The public facing part of the movement and migration idea is the Hostile Terrain 94, a participatory art project sponsored and organized by the Undocumented Migration Project, a non-profit research-art-education-media collective, directed by anthropologist Jason De Leon. The exhibition is composed of 3,200 handwritten toe tags that represent migrants who have died trying to cross the Sonoran Desert of Arizona between the mid-1990s and 2019. These tags are geolocated on a wall map of the desert showing the exact locations where remains were found. This installation will simultaneously take place at 150 locations in 2020 both in the U.S. and across the world.

The University of Mississippi installation is a partnership with the Department of Sociology and Anthropology and will be displayed on the walls of Lamar Hall. 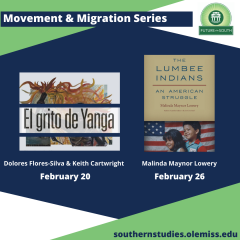 Five SouthTalks will also have a focus on movement and migration, including Keith Cartwright and Dolores Flores-Silva on Feb. 20, Malinda Maynor Lowery on Feb. 26, Leslie Bow on March 4, Delerme on March 18, and Vanesa Ribas on April 15. All events are free and open to the public.

Other professors working on the Future of the South initiative are Jessie Wilkerson with the Invisible Histories project, and Andy Harper and Rex Jones of the Southern Documentary Project using a multimedia class to examine climate change, specifically at the Bonnet Carre spillway. 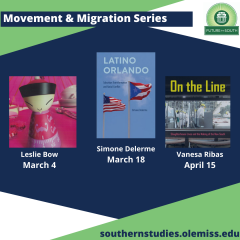 “We will have a Future of the South speaker Oxford Conference for the Book on April 1,” McKee said. “Maurice Carlos Ruffin will talk about the urgent questions that may face literary artists in the present moment in the South. His novel We Cast a Shadow is futuristic so thinking about the future of the South is not a stretch for him.”

Ruffin will also be at the Southern Foodways Alliance fall symposium, and SFA programming for 2020 is also the Future of the South.

The Future of the South initiative is based on a generous grant provided to the Center by the Hardin Foundation, which shares the Center’s deep investment in the future of Mississippi and the education of all Mississippians.

Written by Rebecca Lauck Cleary. This article originally appeared in the Winter 2020 issue of the Southern Register.