Historian Daina Ramey Berry has researched case studies from contemporary educators and various university faculty on what it means to teach the truth about slavery and the value of learning about race and slavery. 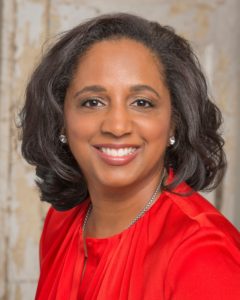 She will discuss her findings at 6 p.m. Tuesday (Sept. 13), during this year’s Gilder-Jordan Lecture in Southern Studies at the University of Mississippi. Her lecture, “Teaching the Truth: Race and Slavery in the Modern Classroom,” is free and open to the public in Nutt Auditorium.

Berry is a prolific historian of slavery, African American history and gender, said Chuck Ross, acting chair and professor of history and African American studies. She is the author of six books, including “The Price for their Pound of Flesh: The Value of the Enslaved, from Womb to Grave, in the Building of a Nation” (Beacon Press, 2017).

“This work examines the life cycle of slaves and is exhaustive and meticulous when presenting the lengths that enslavers would go to maximize profits on their investments,” Ross said. “Dr. Berry’s research has been instrumental in building on the history of slavery in the United States of America.”

Berry is the Michael Douglas Dean of Humanities and Fine Arts at the University of California at Santa Barbara. She previously was the Oliver H. Radkey Regents Professor of History and chair of the history department at the University of Texas, where she also served as  associate dean of the Graduate School.

“Our students, faculty, staff and community members should take advantage of the opportunity to hear from such an accomplished scholar, who undoubtedly will give a talk that will facilitate much dialogue and future questions,” Ross said.

Besides her work as a university administrator and internationally recognized scholar of slavery, Berry is one of the most sought-after consultants for public-facing projects offered by museums, historical sites, K-12 educational initiatives, syndicated radio programs, online podcasts and public television.

Katie McKee, director of the UM Center for the Study of Southern Culture, said she is delighted to have Berry on campus.

“The Center for the Study of Southern Culture has taken ‘Race in the Classroom’ as its programming theme this year precisely because classrooms are such vitally important spaces for gaining accurate, historically-based understandings of the roles race and racism have played in shaping our region and our nation,” McKee said.

Berry completed her bachelor’s, master’s and doctoral degrees in African American studies and U.S. history at the University of California at Los Angeles. She is a scholar of the enslaved and a specialist on gender and slavery as well as Black women’s history in the United States.

She received several awards for “The Price for their Pound of Flesh,” including the Phyllis Wheatley Award for Scholarly Research from the Sons and Daughters of the U.S. Middle Passage; the 2018 Best Book Prize from the Society for the History of the Early American Republic; and the 2018 Hamilton Book Prize from the University Co-op for the best book among UT Austin faculty. The book was also a finalist for the 2018 Frederick Douglass Book Prize awarded by Yale University and the Gilder Lehrman Institute in New York.

Berry has received prestigious fellowships for her work from the National Endowment for the Humanities, American Council of Learned Societies, American Association of University Women and the Ford Foundation. She also has received grants from the Mellon Foundation, the National Historical Publications and Records Commission, as well as the Spencer Foundation and Humanities Texas to work with K-12 educators on teaching the history of slavery to American youth via the Texas Domestic Slave Trade Project.

She is associate editor for The Journal of African American History and one of the lead authors of McGraw Hill’s revised high school and middle school U.S. history textbooks. She also is finishing a book on “The Myths of Slavery” for Beacon Press and a biography of Anna Murray Douglass for Yale University Press.

The Gilder-Jordan Lecture Series is organized by the Center for the Study of Southern Culture, the UM departments of History and African American studies, and the Center for Civil War Research. Made possible through the generosity of the Gilder Foundation Inc., it honors the late Richard Gilder, of New York, and his family, as well as UM alumni Dan and Lou Jordan, of Virginia. 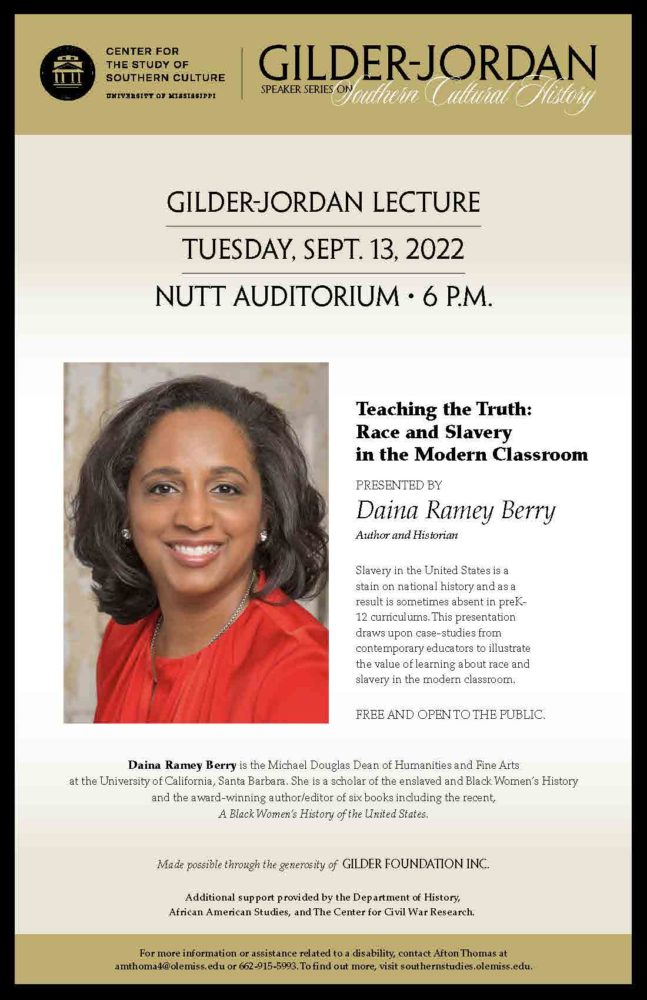