Cajun roots-rock band Feufollet gives listeners a taste of Louisiana Sept. 17 at the Music of the South Concert Series at the University of Mississippi.

The concert is set for 7 p.m. in the Studio Theater of the Gertrude C. Ford Center for the Performing Arts. The venue has a capacity of 150 people. Tickets are available for $10 through the 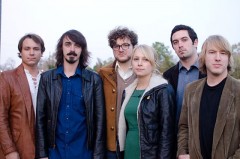 Feufollet is a Cajun French band deeply rooted in the francophone soil of their hometown of Lafayette, La. They first came together and recorded in 1995, when they were all in their early teens or younger. Though famous for their renditions of heartbreaking songs and rollicking tunes, the group features original songs that draw on deep roots tempered by a cutting edge of contemporary life.

“Three members of Feufollet came to the Music of the South Symposium in 2013,” said Ted Ownby, director of the university’s Center for the Study of Southern Culture. “The topic that year was experimentation and innovation, and the band members told some intriguing stories about how, as children, they played music considered traditionally Cajun, and how they have experimented with those traditions while listening to and feeling the influence of all sorts of music. We’re excited to have them performing at the Ford Center.”

The name Feufollet translates to “swamp fire.” Band members Philippe Billeaudeaux, Kelli Jones-Savoy, Chris Stafford, Mike Stafford and Andrew Toups sing and even compose in French, and their music is a blend of modern sounds and ancient styles, mixing zydeco, rock, rhythm and blues, and country.

Billeaudeaux, who plays bass, said he is looking forward the show.

“At the Music of the South Conference last year, we had a great time talking about our musical influences and our creative process, and had the ability to present examples to an interested audience,” he said. “We’re very happy to be asked back, this time with the band.”

The band has been hard at work on its forthcoming album “Two Universes,” which will be its first with new singer-guitarist-fiddler Jones-Savoy and now full-time keyboardist Toups.

“With the addition to our new members, our sound has helped us move forward,” Billeaudeaux said. “Kelli is rooted in old-time and country music as well as Cajun and Creole, while Toups’ keyboards add new colors to our repertoire.”

The Music of the South Concert Series, which highlights intimate evenings with Southern performers, is a partnership between the Center for the Study of Southern Culture and the Ford Center that began in 2012. Previous performers include Caroline Herring, Randall Bramblett, Valerie June, Blind Boy Paxton and John “JoJo” Hermann.