A dance step popularized by Duke Ellington provides modern day inspiration for New Orleans jazz ensemble Skrontch Music. The 10-piece group, made up of the Crescent City’s top performers, will perform at 7:30 p.m. Wednesday, March 4 at Nutt Auditorium on the University of Mississippi campus.

The performance is free and open to the public and is part of the SouthTalks series sponsored by the Center for the Study of Southern Culture and the Department of Music.

Skrontch Music chose its name, which was first coined at the Cotton Club in Harlem, because it is a step with an emphasis on the fourth beat of the measure. “It’s a beautiful symbolism that we are facing backwards looking at where we came from but still propelling forward into the next measure,” said Byron Asher, founder of Skrontch Music.

Skrontch Music is a project exploring the histories of jazz in New Orleans through contemporary composition and improvisation. Their debut album was released in October 2019 and “incorporates elements of sound collage and text from primary source documents to address the intertwined lineages of the formation of New Orleans jazz and anti-Jim Crow activism.”

Asher, a Baltimore native, began his love for music when he was young. His musical family was committed to participating in its local church choir. His mother was a piano player and his father played guitar, so it was only a matter of time before he was set up with music lessons of his own. He started on the piano, but it was not his focus for long. With an older brother who was a talented trombonist, his interest grew towards the saxophone. His school music teacher was persistent about his trial of the clarinet first, and Asher’s reluctant acceptance of the advice would become something that would shape his musical life for years.

After a hiatus in college from playing music, Asher realized that he missed performing and wanted to build a career around it. With the desire weighing heavily on his heart, he packed his bags for New Orleans.

“The (jazz) scene in New Orleans pays a lot of attention to equipping young people and making them grow,” Asher said, “I’ve benefitted from that energy by growing in different directions and exploring in expression, and this is where Skrontch Music came out of.”

Asher earned his graduate degree in music at the University of New Orleans where he is now an instructor of music, and that experience was the beginning of his ability to make the connections that would come to form the Skrontch Music project. Skrontch started in 2017, with people Asher had met through different projects. He also made a point to seek out experienced local musicians whose music he admired.

“Because the community is so supportive, older musicians who were well-established were willing to contribute and join, and the strength of the music we made has kept them coming back,” Asher said. One of his greatest ambitions for the project was for it to be reflective of the community as a whole, and he’s been able to achieve that through diversity in age, race, and musical experience.

When Asher moved to New Orleans, one of his main objectives was to learn more about the history of clarinetists in the city. When he began researching, it became obvious that the tradition he was looking for was steeped in sorrow and oppression.

“It came at the rise of Jim Crow in the deep south and the revocation of reconstruction,” Asher said. “It was a deeply oppressive anti-black racist regime that was trying to continue the oppression of slavery in the south.”

Much of the music itself, Asher believes, is a form of resistance against the racism of Jim Crow. Because his focus in the Skrontch Music project was to explore the New Orleans clarinet tradition, this dark history had to be an integral part of the music.

Homer Plessy of the landmark Plessy v. Ferguson case, from which the “separate but equal” doctrine was founded, was an integral anti-Jim Crow activist from the 7th Ward community, where many of the clarinetists also derived. Because of this, Skrontch Music’s album of composed music and improvisation also contains sound collages. One of these involves ensemble members reading text from the original Plessy v. Ferguson decision.

“We need to think of it in a contemporary sense. Less of having an ax to grind and more of trying to set up these linkages so that the listener can draw their own conclusions about the relationships between the music and the political context,” Asher said. “But, it’s music. You’ll get what you get out of it. If you like the music, I’m cool with that, too.”

The Skrontch Music tour is made possible by an inaugural Jazz Road touring grant from South Arts. 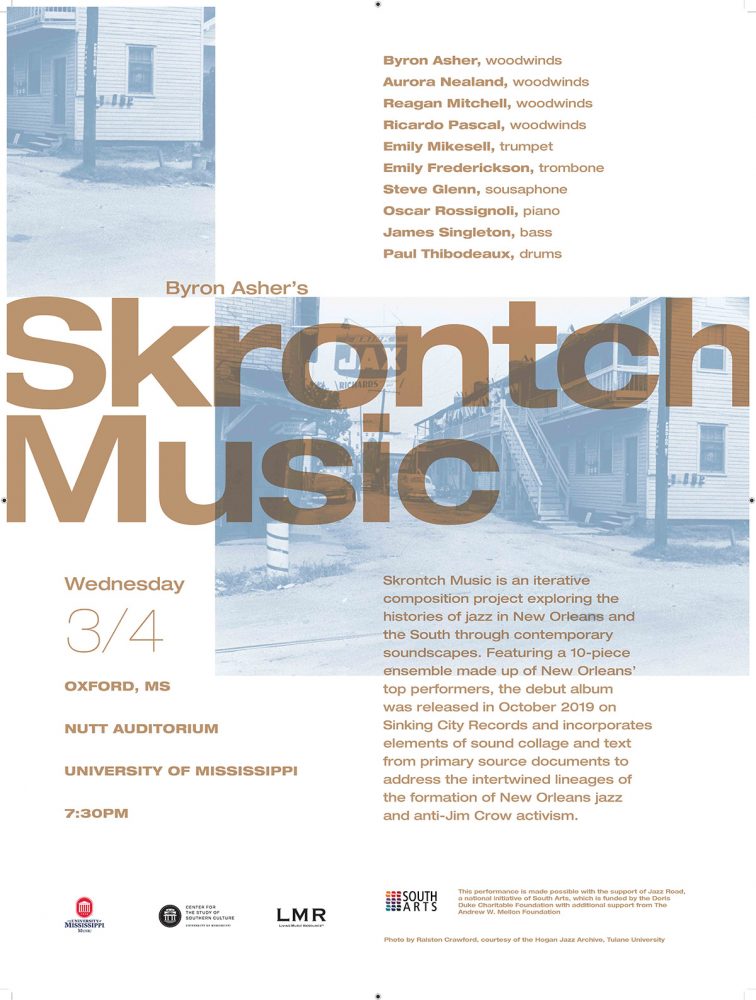