Singer-songwriter Caroline Herring returns to Barnard Observatory for a special concert as part of the Porter Fortune Jr. History Symposium. The Symposium honors the recent retirement of Charles Reagan Wilson with a series of talks and panel discussions on the topic of Southern Religion and Southern Culture. 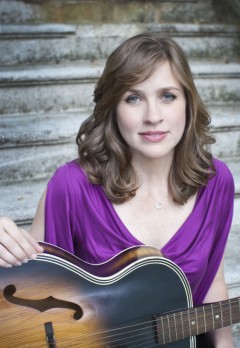 Herring’s concert is set for Friday, Feb. 27 at 7:30 p.m. in the Tupelo Room of Barnard Observatory, and is free and open to the public. Herring’s music combines a unique voice and multiple musical influences.

She said it is her great pleasure to play a concert honoring Wilson.

“Dr. Wilson taught me when I earned my masters in Southern Studies at UM, and I loved everything about him, including his extensive southern kitsch collection,” Herring said. “I also went to the local Episcopal church with him and we took a year-long Education for Ministry course together. After moving to Texas and working in El Paso with colonias communities, I came to a new appreciation of the fact that Dr. Wilson grew up in El Paso and then shifted his work and life from one deepest South to another.”

It was a natural choice to have Herring play a concert in honor of Wilson, a former director of the Center for the Study of Southern Culture, since she is a native Mississippian and 1998 UM Southern Studies alumna.

“Charles Wilson has cared for many, many students, me included,” Herring said. “I remember introducing him to my newborn daughter — he is the kind of person whom you want to meet your kids. A lot of the songs I sing are due, in part, to his tutelage.”

Ted Ownby, director of the Center, said it will be fun to welcome Herring back to Barnard Observatory.

“Caroline Herring does Southern Studies when she writes and sings, so we’re excited she can be part of the symposium,” Ownby said. “Her M.A. thesis was on a topic in southern religious history—she studied the religious roots of anti-lynching activists—and she deals with the intersections of religion, history and, obviously, the history of music in her performances. She’s also a good friend to a lot of people around here, and she has plenty of fans both through her CDs and her work with Thacker Mountain Radio.”

Herring released “I Will Go Into the Day” in January 2014, where she sets to music the magic and wonder of childhood.

Fats Kaplin, who played on her 2012 album “Camilla” and plays more than 15 instruments, will accompany Herring at this concert. A review of that album named Herring one of the “most literate songwriters of her generation.”

“I’m thrilled Fats Kaplin likes my work, because he is a busy man,” Herring said. “The last time I asked him to play a gig, he couldn’t because he was playing with Jack White in Paris. Thankfully, he’s free on the 27th.”

The full schedule of the History Symposium is available. It began in 1975 as an annual conference on Southern history, and is named for the late Porter L. Fortune Jr., UM chancellor emeritus. Past events have examined topics such as the Southern political tradition, childhood, religion, and the role of gender in shaping public power.