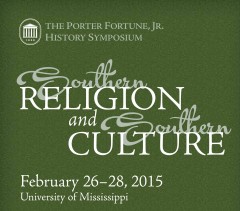 Below is the amended schedule, taking into account the University’s closure on Thursday, Feb. 26.

The 2015 Porter Fortune, Jr. History Symposium will take place February 27 – 28 on the University of Mississippi campus.  The symposium will honor the recent retirement of Charles Reagan Wilson with a series of talks and panel discussions on the topic of Southern Religion and Southern Culture.   Some of Dr. Wilson’s former students will be involved in the symposium as moderators, and others will help discuss his work as scholar and mentor.

All sessions free and open to the public.  Schedule subject to change.

Friday, February 27
All Friday sessions are at the Yerby Conference Center. Concert at Barnard Observatory.

10:30am Paper
Introduction by Becca Walton, University of Mississippi
‘The Pure of Body are Pure of Soul’: Religion and the Making of the South’s Sports Culture, 1865-1926
Arthur Remillard, St. Francis University

“Whatever Happened to Separation of Church and State?’  Southern Baptists and the Struggle over Religion in Public Schools, 1962-2006”
Charles Westmoreland, Delta State University

‘Shame of the Southland’: The Selling of the Visceral South
Sarah Gardner, Mercer University

10:30am Discussion of the future of the field of Southern religious history and of the scholarly research and teaching legacy of Charles Reagan Wilson.
Moderated by Paul Beezley, Jacksonville State University and James G. Thomas, Jr., University of Mississippi