The Brown Bag Lunch and Lecture Series kicks off Wednesday, Sept. 16 with Charles Hughes, a Memphis Center Postdoctoral Fellow at Rhodes College. Hughes offers a provocative reinterpretation of the 1960s and 70s, a key moment in American popular music and challenges the conventional wisdom about race in southern recording studios and the music that emerged from them. 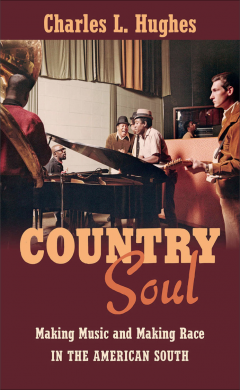 “My talk will be based on my book ‘Country Soul: Making Music and Making Race in the American South,’ which explores the relationship between black and white musicians in what I call the ‘country-soul triangle’ of Memphis, Muscle Shoals and Nashville in the 1960s and 1970s,” Hughes said. “I use this fascinating story to make some larger claims about the relationship between popular music and racial politics in the South and the United States during this pivotal era and beyond. In this talk, I’ll use several musical examples to spotlight the shared and divergent pathways between the music and its makers.”

Hughes earned a B.A. and M.A. in Afro-American Studies and a Ph.D in history from the University of Wisconsin-Madison. He is working on projects about the career of the Staple Singers, as well as the impact of rural electrification projects on popular music. Additionally, he is in the very early stages of a book project about the history of professional wrestling in the United States.

The Brown Bags are sponsored by the Center for the Study of Southern Culture and take place on select Wednesdays at noon in the Tupelo Room of Barnard Observatory. They are free and open to the public.

The next Brown Bag is set for Sept. 23 with John Bullion, who will discuss “Lyndon Johnson, Civil Rights and the Democratic Party in the South.”