Jazz musician Alphonso Sanders plays in the Grove at 6 p.m. Sunday, June 12 as part of the month-long Summer Sunset Series. The concert is sponsored by the Center for the Study of Southern Culture and is free and open to the public.

Sanders, a multi-instrumentalist, is the Chair of Fine Arts and Director of the B.B. King Recording Studio at Mississippi Valley State University, and has been involved in music education for more than 25 years. As the Director of the B.B. King Recording Studio he is involved in archiving the music of Delta musicians. As a Fulbright Scholar, Sanders studied abroad in China visiting 12 major cities, exploring the culture of Chinese music and visual arts. In 2011, the Mississippi Humanities Council honored him as the Humanities Teacher of the Year. He received degrees in music from Mississippi Valley State University, Valdosta State University and the University of Mississippi. 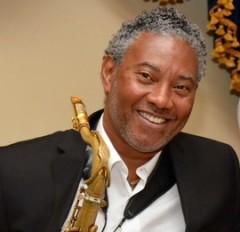 Sanders performed for the Center’s Mississippi Delta Cultural Tour in May 2014, which was directed by Jimmy Thomas, associate director for publications. They first met in Leland, when Sanders played at Vince’s Restaurant.

“Alphonso Sanders a real presence for jazz in the Delta – a place that’s otherwise known for its blues,” Thomas said. “He does so much with music education as someone who’s not only performing but teaching and enabling Delta youth to appreciate other musical genres.”