Sixty years after civil rights activist James Meredith integrated the University of Mississippi, students, faculty, staff, alumni and guests will gather in his honor to commemorate the anniversary of that defining moment in the university’s history.

Meredith, who became the first African American student to enroll at UM on Oct. 1, 1962, will take the stage and speak Wednesday (Sept. 28) at the Gertrude C. Ford Center for the Performing Arts.

The free, two-hour signature event, “The Mission Continues: Building Upon the Legacy,” begins at 6:30 p.m. Reserve tickets by contacting umbo@olemiss.edu or calling 662-915-7411. The event also will be live-streamed.

“As a civil rights activist, businessman, politician, author and more, James Meredith is an important part of living history who is intricately intertwined with our university,” Chancellor Glenn Boyce said.

“Through all the events and activities we have planned to honor James Meredith and the 60th anniversary of integration, I hope that people are inspired by how Mr. Meredith’s courage and persistence demonstrate how even one individual can affect change and make an impact, not just for themselves but for future generations.”

A series of special presentations also are slated honoring Meredith. 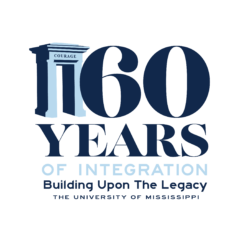 Additionally, the event will feature a screening of the documentary, “Who is James Meredith?” The film is directed and narrated by Meredith’s wife, Judy Meredith, a former TV and radio news reporter and anchor who is also a retired college mass communications professor.

“It is the moment for us to all pause and honor Mr. Meredith,” said Shawnboda Mead, UM vice chancellor for diversity and community engagement. “This event is all about him, his life, his legacy, the contributions he’s made not only to this university but to higher education, the state of Mississippi and really the United States.”

“It is a time for us as a community to come together and acknowledge the significance of this time in our university’s history.”

Mead said she hopes attendees will see a glimpse of the James Meredith who sits for hours on end in the library, who cracks jokes with his wife and who loves to laugh.

Scurlock, who has been a member of the university community for more than two decades, said the university’s mission is to serve each person who walks onto campus, regardless of background.

“The flagship moves the state forward,” Scurlock said. “The legacy that James Meredith left is that the University of Mississippi has to serve every Mississippian.”

When everyone leaves the event and the lights of the Ford Center dim, Scurlock said she hopes attendees will remember the difference Meredith made and the difference they can make, too.

“I want them to feel a sense of ownership, agency,” she said. “They can be agents of history and create change.”

Ultimately, Mead said, the university will not always be able to invite an icon of American history to campus to speak with students. Nor will every student who comes to Ole Miss in years to come be able to look a man in the face and see someone whose influence on the state and campus has been so vast.

“It’s not a moment we will have forever,” said Mead, sitting last week in her office in the Lyceum, just yards away from the location of the iconic photo of Meredith, surrounded by U.S. marshals and hecklers, on the day of his enrollment.

“It’s such a significant opportunity for our community to come over to the Ford Center and hear from a living legend.”

Focused on the theme of “The Mission Continues: Building Upon the Legacy,” the university’s commemoration spans more than a year. Besides the signature event on Sept. 28, a series of events, panel discussions, lectures, exhibits and other activities are being planned for the week of Sept. 26, culminating with the anniversary of Meredith’s enrollment on Oct. 1.

Other activities and events will be held throughout the entire 2022-23 academic year.

Sponsors for the signature event include the Office of the Chancellor, Office of the Provost, Division of Diversity and Community Engagement, School of Education, College of Liberal Arts, Department of Intercollegiate Athletics, Office of Research and Sponsored Programs, and Gertrude C. Ford Center for the Performing Arts.