Elvis Presley died in 1977. That was the same year the Center for the Study of Southern Culture hosted its first events, and just a year or two before the first Southern Studies classes.

I thought a little about that coincidence last week when I re-read Joel Williamson’s powerful new biography Elvis Presley, A Southern Life. It’s one of the best books I have read in a long time, by one of the great southern historians. For me, the book raises an apparently absurd but still maybe intriguing question: Could Southern Studies have saved Elvis Presley? 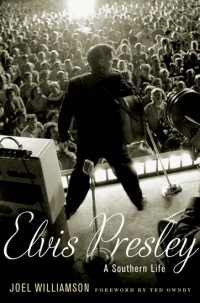 Oxford University Press kindly gave me the chance to write a forward to the book, so I have spent a lot of time with Williamson’s volume. It starts with Presley’s death, goes back to his roots and spends a great deal of attention on Elvis Presley’s female fans and their impact on the performer and his music. In the forward I tried to summarize one of the book’s main arguments: “Williamson emphasizes that the contours of Presley’s life were set by 1958, when he was 23 years old. Presley got stuck as the star in a grand drama about desire, and he enjoyed its benefits too much to break away from its limitations.”

The book makes it difficult to laugh at the obvious and easy jokes so many people make about Elvis Presley, his outfits, his entourage, his attractiveness to women, his weight, his “thank you very much,” his leaving the building. A sympathetic but critical volume, Elvis Presley is a tragedy, never, except maybe in its discussion of the movies,  a comedy.

Is it possible that studying the South could have helped Presley have a healthier, more focused life, maybe a longer life? Well, maybe. Elvis Presley was a narrow reader, with interests mostly in the Bible and some aspects of Eastern religions. I like to think studying things usually has positive consequences, even if we don’t know what they might be. Maybe Presley could have started studying the background to the aspects of his life that made him such a unique figure, to explore his own identity and the stories behind the forces in his own life. Just imagine a short reading list, available in 1977, about Presleyan topics: Samuel S. Hill’s Southern Churches in Crisis, Donald Mathews’s Religion in the Old South, Lillian Smith’s Killers of the Dream, Anne Firor Scott’s The Southern Lady from Pedestal to Politics, W.J. Cash’s The Mind of the South, John Shelton Reed’s The Enduring South, Lawrence Levine’s Black Culture and Black Consciousness, The Souls of Black Folk by W.E.B DuBois, Winthrop Jordan’s White Over Black, Let Us Now Praise Famous Men by James Agee and Walker Evans, Mothers of the South by Margaret Haygood, A Childhood by Harry Crews, Blues People by Amiri Baraka and Bill Malone’s Country Music, U.S.A. Flannery O’Connor. Huckleberry Finn. Roots. What books by Faulkner? Maybe he would have read The Reivers, the story of a naive small town boy from north Mississippi and his Memphis adventures with race, sex, and automobiles.

Maybe studying such works in SST could have helped Elvis Presley see his life as a unique part of a larger story. Maybe working through difficult issues would have encouraged more intellectual discipline or more thoughtful evaluation of the passions in his life. Maybe thinking about sex, race, wealth, and music would have encouraged a greater understanding of himself and other people and inspired new study, new work, and new music.

Who knows if Southern Studies could have saved Elvis Presley from an adulthood of bad health and bad decisions. I’ll admit that it seems unlikely. But I like to imagine Presley sliding into the back of the Barnard Observatory with his new fiancée Ginger Alden, listening to lectures, doing the readings, learning, thinking, sharing sometimes, trying out some new interests. I know that studying things doesn’t solve all our problems, but study has the potential to make us more engaged and empathetic, maybe even healthier, and Williamson’s book makes me wish Elvis could have joined us.