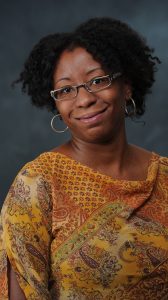 Jodi Skipper was among eight given the award for public engagement

The following release is written by Edwin Smith of UM Communications

Skipper, assistant professor of anthropology and Southern studies, has been awarded a prestigious Whiting Public Engagement Fellowship from the Whiting Foundation, a Brooklyn, New York-based organization that has a long history of support for the humanities and literature.

“I was ecstatic, and grateful for this opportunity,” Skipper said. “I will use this fellowship period to organize and facilitate a series of workshops entitled ‘Beyond the Big House: Interpreting Slavery in Local Communities.’

“These workshops seek to connect a growing population of communities in Mississippi interested in addressing slavery through historic sites.”

Skipper was selected for the award in recognition of her involvement with the Behind the Big House program, a slave dwelling interpretation program started by Jenifer Eggleston and Chelius Carter in Holly Springs.

“I have been privileged to enough to help with their project, which interprets the lives of enslaved persons through the homes in which they once lived,” she said.

Behind the Big House, one of the few historic site tours developed with the explicit goal of interpreting the experiences of enslaved people, will serve as a model for Skipper’s project. She said her broader goal is to expand the Behind the Big House model from Holly Springs to other parts of the state.

“The program model has successfully spread to the state of Arkansas,” Skipper said. “My community partners in north Mississippi and I are optimistic about its potential to take root in other communities around this state.”

The Whiting Public Engagement Fellowship, in its second year, is designed to celebrate and support faculty who embrace public engagement as part of the scholarly vocation. Seven others were selected for this year’s cohort.

Each fellow receives a semester of leave to pursue a public-facing project, as well as a $10,000 stipend toward project costs.

“The foundation believes that those who devote their professional lives to the study and teaching of the humanities are in a unique position to contribute to public understanding,” said Daniel Reid, the foundation’s executive director. “This fellowship aims to identify professors with a demonstrated commitment to using their scholarly expertise to reach wider audiences and fund ambitious projects designed to have direct and significant impact on a specific public outside the academy.”

A public anthropologist who thinks through how to represent difficult pasts in the present, Skipper specifically addresses the underrepresentation of enslaved communities at historic sites across the South. Her research prioritizes collaboration with communities seeking to address these issues at local levels.

“The fact that Dr. Skipper was selected as a Whiting Public Engagement Fellowship signals the national impact of her scholarship and public engagement,” said Kirsten Dellinger, chair and associate professor of sociology and anthropology. “I am thrilled that she is being honored as a ‘public-facing’ scholar.

“The generous support she has received from the Whiting fellowship will allow her to further enhance the Behind the Big House program, bringing it to other parts of the state and beyond.”

Ted Ownby, director of the university’s Center for the Study of Southern Culture and professor of history, concurred.

“Scholarship that engages the public frequently takes different skills than the scholarship a lot of us do, and it often takes a lot of time,” Ownby said. “The Behind of the Big House project has done a great deal to teach about the history of slavery in Mississippi, and I’m delighted this fellowship will allow Jodi Skipper the freedom to develop new parts of that project.”

She was honored Feb. 10 in Jackson with the Mississippi Humanities Council’s Scholar Award for her work.

The Whiting Foundation was created by Flora Ettlinger Whiting, a New York investor, collector and philanthropist with a lifelong commitment to culture. She was a founding member of the Friends of the American Wing at the Metropolitan Museum of Art and a member of the board of the noted magazine company Crowell-Collier, which published authors such as F. Scott Fitzgerald, Martha Gellhorn, H.L. Mencken and Arthur Schlesinger Jr.

To contribute a gift of support, contact Nikki Neely, director of development for the College of Liberal Arts, at nlneely@olemiss.edu or 662-915-6678, or give online at http://umfoundation.com/southern.

For more information about the Department of Sociology and Anthropology, visit http://socanth.olemiss.edu. For more about the Center for the Study of Southern Culture, go to http://southernstudies.olemiss.edu.