It’s not every day that a geography professor is stumped by a pop quiz about a Bulgarian skyline, but that’s how Catarina Passidomo discovered she would receive the 2020 Cora Lee Graham Award for Outstanding Teaching of Freshmen.

Passidomo, Southern Foodways Alliance Assistant Professor of Southern Studies and assistant professor of anthropology, found out she was being honored with the award during a Zoom meeting with Donald Dyer, associate dean of faculty and academic affairs for the College of Liberal Arts.

“I assumed this had something to do with my tenure file, so I was a little alarmed when our meeting started with a quiz—he asked me to identify the Eastern European city pictured in his virtual background,” Passidomo said. “It was Sophia, the capital of Bulgaria, and I guessed incorrectly. I thought, ‘Oh, no, is this how tenure is determined?’ He then switched the background to a photograph of the three recipients of last year’s teaching awards and asked ‘Now do you know why I wanted to speak with you?’ At that point, I guessed correctly.”

Dyer said Passidomo is well respected and admired by students and colleagues alike.

“Dr. Catarina Passidomo has demonstrated for years that she is one of the finest teachers in the College of Liberal Arts, indeed on our campus broadly, and this year her strong nominations for the Cora Lee Graham Award for Outstanding Teaching of Freshmen bore witness to her professional acumen in this area,” said Dyer.

Passidomo, who will have her name added to award plaques in the dean’s office and who will receive $1,000, was surprised and honored by the announcement, “and relieved to learn I hadn’t blown my chance at tenure by misidentifying a skyline,” she said.

In 1984 Cora Lee Graham of Union City, Tennessee, established an endowment and directed that the proceeds from her gift be used “to help retain your better professors who teach the freshman classes” in the College of Liberal Arts.

She knows there are many outstanding teachers to come before her, as many of them are her colleagues in Southern Studies and sociology and anthropology, so she doesn’t view herself as the outstanding teacher, just one who is being recognized this year.

“I have a lot of contact with freshmen in my introductory courses in Southern Studies and human geography, and I know that teaching freshmen can be both a privilege and a challenge,” Passidomo said. “Beyond just exposing them to class material, we’re really orienting them to a whole new way of being a student, to negotiating lots of conflicting demands on their time and attention, and to figuring out how they fit into this place. That process can be daunting for both students and their professors, but it also presents an opportunity to directly engage students with class material that feels relevant to their lives in this particular place and time. Because of the classes I teach, it’s relatively easy to ground course content in ‘the real world’ and to provide them with tools and a new vocabulary to help them make sense of it.”

Of course, everything is a bit different now, since everyone is apart.

“We’re all struggling to balance teaching and learning with being in a place where neither of these things typically happen, where there are other people or pets or jobs making demands of us, possibly, and where we may have legitimate worries about the physical and economic health of our loved ones and communities,” Passidomo said. “Logistically, there was a bit of a learning curve—maybe for the students, and definitely for me. It was also sad to not get to see one another again and to have in-person classes end in a way that seemed abrupt. But we all understand, I think, that we’re living through a very weird and scary time, and the least we can do is try to figure out how to finish a semester online, and so we did.”

Passidomo added that effective and empathetic teaching can only happen when faculty themselves are supported. Since both Jeff Jackson, chair of sociology and anthropology, and Katie McKee, director of the Center, have won this award in the past, Passidomo knows they understand.

“I’m really lucky to be a part of two terrific departments with Southern Studies and sociology and anthropology, and to have the support and collegiality of the Southern Foodways Alliance,” she said. “I’m surrounded by really smart, compassionate people who are changing the world through their teaching, research, and service. I have colleagues in both departments who won Liberal Arts research awards this year—Annie Cafer in sociology and Jessie Wilkerson in Southern Studies and history. Dr. McKee and I co-teach SST 101 often, and I have learned a tremendous amount from her.  She has certainly made me a better teacher, and teaching with her is way more fun than teaching alone.”

Jessie Wilkerson, assistant professor of history and Southern Studies, learned about the College of Liberal Arts Mike L. Edwards New Scholar Award when she checked her email, and let out a “whoop” when she read its contents.

“I hadn’t expected to open an email with news of an award,” said Wilkerson, who is also the graduate advisor. “I thought it was just another COVID-related email, so I was delighted for good news.”

The award is presented annually to untenured, tenure-track professorial-rank faculty members in the College of Liberal Arts who are within six years of their initial tenure-track academic appointment and who have demonstrated exemplary performance in research, scholarship, and/or creative achievement. Depending on the quality of the pool of nominees, up to four awards will be available, with one each chosen from the areas of natural sciences and mathematics, social sciences, humanities, and fine and performing arts. The ideal recipients must have significantly enhanced the scholarly reputation of the college and university through exceptional contributions to their disciplines and demonstrated a positive impact on the success of their department. Each recipient receives a $1,000 cash prize and a medal.

Wilkerson said being nominated by the chairs of her department, Katie McKee and Noell Wilson, is an honor because those are people who understand what she does, day in and day out.

Like everyone else, Wilkerson dealt with the difficult shift to remote classes because she knew the classroom dynamic couldn’t be recreated. Since both of her classes were discussion based, she had a relationship with the students, and they had relationships with one another. When the announcement was made to shift online, “we took some time to mourn that nothing about the new version of the class would be the same—how could it be? I’m still sad that we didn’t get to finish out the semester in person, but we did our best with online discussions.”

This was especially true for her US women’s history course, where she and the students got to know each other’s interests and questions that really mattered to them.

“We often had a good time. We delved into difficult topics, and students often lingered after class or walked with me to my next class” Wilkerson said. “Some of them were falling in love with women’s history. I recognized it because I acted exactly the same way the first time I took a women’s history class in college—joyful, exasperated, frustrated that I hadn’t been taught women’s history before then, eager to learn as much as possible.” 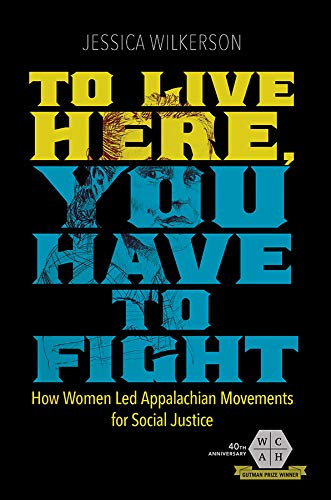 Recently, Wilkerson also received an honorable mention for the Philip Taft Labor History Prize for her book To Live Here You Have to Fight: How Women Led Appalachian Movements for Social Justice, which focuses on women’s activism in Appalachian labor, antipoverty, welfare rights, women’s, and environmental movements in the 1960s and ’70s, drawing heavily on oral history accounts of trials and tribulations in order to highlight the lived experience of participants.

Wilkerson said she will always cherish the collaborative work that was the backbone of those courses.

“I’ll be forever grateful to the Southern Studies program, especially the colleagues who pushed me and the students who inspired me,” she said. “I’m a scholar who sees her academic work linked strongly with contemporary issues and struggles for fairness and justice. More than any other space on campus, I’ve gotten to explore what that means in Barnard—whether it was co-teaching with Jodi Skipper, Catarina Passidomo, Brian Foster, or Barb Combs, or imagining with my students what community-engaged work looks like in Mississippi, or in long hallway conversations with Katie McKee, Afton Thomas, and many others. At the Center, I found the freedom and often the inspiration to be a more creative scholar than when I arrived.”