Music from the American South has made an indisputable impact on culture and politics in the U.S. and around the world, and an upcoming symposium at the University of Mississippi will examine the South’s most prominent and influential musical voices.

The Southern Music Symposium will address questions such as how musicians are creating “Southern” in their sounds and speaking to broader matters of national and international importance, and in what ways they build on the sounds of the past or provide the soundtrack for our common and divided present.

The Feb. 26 event in the Overby Center Auditorium is free and open to the public. Hosted by the university’s Center for the Study of Southern Culture, the symposium highlights musicians and feature presentations by prominent and emerging scholars of Southern music.

Randall J. Stephens, , reader and associate professor of history and American studies at Northumbria University, will give a keynote address on religion and rock ‘n’ roll at 5:30 p.m. A Kansas native, Stephens writes and teaches about the American South, religion in the U.S., religion and politics, conservatism and popular music.

His lecture focuses on the interesting and surprising connections between rock ‘n’ roll music and Christianity.

“Many of the first-generation performers had roots in tongues-speaking churches or attended these regularly,” Stephens said. “Some of those are well-known performers like Elvis, Johnny Cash, Jerry Lee Lewis, Little Richard, Sister Rosetta Tharpe and many more.

“I also will talk about how evangelicals, Catholics and others took aim at the new, wild genre and demonized its ‘savage jungle rhythms.'”

From Stephens’ perspective, this makes the advent of Christian rock in the mid- and late-1960s all the more peculiar. 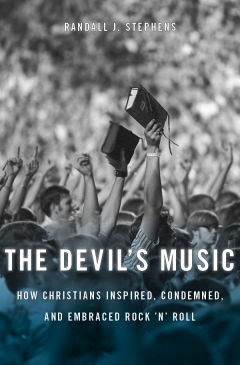 “I ask: How did believers go from railing against the devil’s music to sanctifying it for youth outreach and holy entertainment?” he said. “How did hippie Christians infuse loud, plugged-in music with the message of redemption, the apocalypse and final judgment?”

He is completing his third book on religion and rock music for Harvard University Press. Stephens earned his doctorate in American history from the University of Florida, and master’s degrees in history from Emporia State University and theological studies from Nazarene Theological Seminary.

Brian Foster, UM assistant professor of sociology and Southern studies, will welcome attendees at 1 p.m., followed by a panel with student researchers. He then moderates the 2:30 p.m. scholars roundtable with Zandria Robinson and Charles Hughes.

Robinson, assistant professor of sociology at Rhodes College, is the author of “This Ain’t Chicago: Race, Class, and Regional Identity in the Post-Soul South” (University of North Carolina Press, 2014) who also wrote a 2016 Rolling Stone magazine article about how Beyonce’s “Lemonade” exposes inner lives of black women, as well as a New Encyclopedia of Southern Culture entry on “Southern Crunk and Hip-Hop Culture.”

Hughes is director of the Memphis Center at Rhodes College, and his acclaimed book, “Country Soul: Making Music and Making Race in the American South” (University of North Carolina Press, 2015), was named one of the Best Music Books of 2015 by Rolling Stone and No Depression magazines.

The Southern Music Symposium gives people a chance to both celebrate and turn a critical eye toward Southern music cultures, Foster said.

“I am especially interested in hearing how Drs. Robinson and Hughes are thinking about the contemporary landscape of Southern music, both in terms of new and emergent sounds and in the evolution of Southern visual arts,” Foster said.

“Like the broader symposium, we see this as a rare opportunity to bring together working musicians, scholars and the broader public to have a conversation about the past, present and future of popular and underground music,” Grem said. “We also see it as a chance to investigate notions of the ‘Southern’ and how musicians have constructed and challenged that regional identity while claiming it for themselves – as well as the social and political impact of doing so.”

Bains, Pave and Fei will conclude the symposium with a free 9 p.m. concert at Proud Larry’s, at 211 S. Lamar Blvd. in Oxford.

Posted in: Concert, Conferences and Symposia