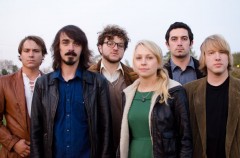 The 2014-2015 Music of the South Concert Series, presented in partnership with the Gertrude C. Ford Center for the Performing Arts, will kick off with a performance by the band Cajun band Feufollet on Wednesday, September 17 at 7pm in the Ford Center’s Studio Theater.  Tickets are $10 and will be available at the UM Box Office (on sale in mid-late August) and at the door.

Check out an All Things Considered interview of Feufollet by NPR’s Melissa Block.

Begun in the fall of 2012, the Music of the South Concert Series  highlights intimate evenings with southern performers and takes place in the Ford Center’s Studio Theater, a space that seats 150.