Ralph Eubanks claims he is a nonfiction writer because he is bad at making things up, but his gentle grace in describing the beauty and pain of the landscape of Mississippi needs no fictionalization.

The Mississippi Humanities Council has lauded Eubanks, visiting professor of English and Southern Studies at the University of Mississippi and writer-in-residence at the Center for the Study of Southern Culture, with a 2022 Public Humanities Award. The UM alumnus was presented the Reflecting Mississippi Award for his work as a memoirist and literary scholar.

The Public Humanities Awards recognize outstanding work by Mississippians in bringing the insights of the humanities to public audiences.

“This is an honor I never expected and not one I would have anticipated when I was sitting beside my watermelon stand the summer of 1972, reading Faulkner’s ‘The Reivers’ in the hot August sun alongside Highway 35 in Mount Olive, which I tell people is the most Mississippi thing I have ever done,” Eubanks said.

“I see this award not as recognition, but a challenge to write honestly and deeply about this place we call home.”

Recipients of MHC awards were honored at a public ceremony and reception at the Two Mississippi Museums in Jackson.

“In 2022, the Mississippi Humanities Council is marking our 50th anniversary with a yearlong series of programs that explore how the narratives of our state have, or have not, reflected Mississippi and the experiences of its people,” said Stuart Rockoff, MHC executive director.

“Ralph Eubanks’ work, as a memoirist, literary scholar and national interpreter of our state’s complicated history has helped revise our state’s narratives to reflect Mississippi more honestly and accurately. Thus, we were honored to recognize Ralph’s achievements with a special Reflecting Mississippi award.”

Eubanks said upon receiving the award, he was reminded of a Sunday homily he heard 20 years ago that stuck with him.

“The priest challenged the congregation to look deeply into their consciousness and think of what they would say when asked ‘Who do they say that I am?’” Eubanks recalled. “I want to turn that around and ask all of you to think about what it is you say when someone asks you, ‘Who are we as Mississippians?’

“We all reflect Mississippi, and I accept this award in the spirit of not only challenging myself but to challenge all of you to think about ‘Who do they say we are.’”

“Ever since our founding in 1972, the Mississippi Humanities Council has empowered Mississippians to share and interpret their unique stories,” Smith said. “For almost 50 years, we have been in the forefront of uncovering and highlighting the rich complexity of our state’s history and culture.”

In Eubanks most recent book, “A Place Like Mississippi: A Journey Through a Real and Imagined Literary Landscape,” he takes readers on a complete tour of the fictional and real scenes and settings that have inspired generations of authors. The book honors and explores the landscape and history of Mississippi as it reveals the many ways those elements have informed the work of some of America’s most treasured authors.

“When a place is experienced through the lens of the real and the imagined, whether thought our own eyes or those of a writer, it takes on a heightened sense of reality,” he writes in the prologue. “Whether the pages of your notebook are blank or filled with memory, Mississippi’s landscape is one that feeds the work of its writers.” 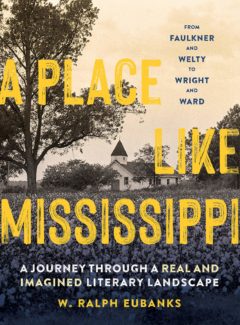 At the recent Oxford Conference for the Book, Eubanks also gave a Reflecting Mississippi lecture, where he described how the place where he lives has followed him throughout his life, and that in “A Place Like Mississippi” he explores the state with the eyes of a native and someone who sees it from outside.

“I received the Reflecting Mississippi Award as a challenge to keep writing honestly about Mississippi,” he said. “I thought being an expat was part of my life plan, and I thought I’d closed the door on Mississippi, but I realized in middle age I needed to go back.

“We have so many stories to tell and we have so much to explain. We are a state of storytellers and I want people to think about those stories.”

More awards are also in Eubanks’ future, as the Mississippi Institute of Arts and Letters has announced that he will be recognized at its 43rd annual awards banquet June 11 at the Mississippi Museum of Art in Jackson for “A Place Like Mississippi.”

Eubanks is the author of two other books: “Ever Is a Long Time: A Journey Into Mississippi’s Past” (Basic Books) and “The House at the End of the Road: The Story of Three Generations of an Interracial Family in the American South” (HarperCollins). He has contributed articles to the Washington Post Outlook and Style sections, WIRED, The Hedgehog Review, The Wall Street Journal, The American Scholar, The New Yorker and National Public Radio.

A graduate of UM and the University of Michigan, he is a recipient of a 2007 Guggenheim Fellowship from the John Simon Guggenheim Foundation and has been a fellow at the New America Foundation.

The MHC is funded by Congress through the National Endowment for the Humanities to provide public programs in traditional liberal arts disciplines to serve nonprofit groups in Mississippi.