On Violence in the SOUTH: Ida B. Wells-Barnett 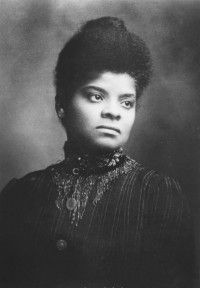 As a response to violence and the issues it raises, the Center will be running a series of entries from the New Encyclopedia of Southern Culture volume on Violence, published in 2011. Today we start with the entry on Ida B. Wells-Barnett by scholar Patricia A. Schechter.

For Ida B. Wells-Barnett, “southern culture” was an embattled site of identification. She was a native of Holly Springs, Miss., born a slave in 1862. There she attended Rust College, run by the American Missionary Association, and was strongly influenced by its “Yankee” teachers. Wells-Barnett was baptized in the Methodist Episcopal Church. After her parents’ death in the yellow fever epidemic of 1878, she moved to Memphis, Tenn., around 1880 and lived there until 1892. That year, she published her most important writing, a pamphlet entitled “Southern Horrors: Lynch Law in All Its Phases.” This essay placed southern codes of honor in the horror of the lynching-for-rape scenario, part of a violent, morally hypocritical, crassly economic system of white supremacy. White men justified the murder of “bestial” black men by claiming the role of protectors of “weak” white women; Wells-Barnett proved that statistically the rape charge was rarely in play during actual, documented lynchings. Instead, the cry rape was often a cover to punish black men who in any way challenged the social, political, or economic status quo of the South. She also pointed out that white women sometimes participated in both mob activity and in consensual sex with black men. When a death threat appeared in print in 1893 because of Wells-Barnett’s newspaper criticism of lynching and southern honor, the region became off limits and she left for the North. She returned only once, in 1917, to investigate the plight of 16 Arkansas farmers imprisoned for labor organizing activity and sentenced to die in Helena, and then she went in disguise.

Ida B. Wells-Barnett became famous—to opponents, infamous—for her critique of the South, but she accomplished the work largely outside of it. In 1895 she settled in Chicago, Ill., married lawyer Ferdinand L. Barnett, and raised four children. She died there in 1931. She arguably achieved greatest prominence outside the United States during 1893 and 1894, when she traveled to England and Scotland to mobilize opposition to lynching in the U.S. At strategic points, however, she referred to herself as a “southern girl, born and bred” or by the pen-name “Exiled.” Such identifications established her credibility as a native witness to history, especially since a black woman’s moral authority was by definition suspect in U.S. society. After a difficult period of political retrenchment in Chicago and the brutal race riot of July 1919, Wells-Barnett again accented her southern roots and reached out to the progressive elements of the white South in renewed efforts toward interracial understanding in the region (probably the CIC), but this offer likely did not even reach ears that had long since tuned her out.
Ironically, some of the best evidence of Ida B. Wells-Barnett’s sparsely documented personal life dates from the 1880s, when she lived in Memphis and participated in a wide array of activities that mark her as a product of the post-Reconstruction New South. She left a diary dating from December 1885 to September 1887, and it provides vivid details of her life during this dynamic period. Entries describe a context not, perhaps, stereotypically “southern” or dominated by folkways. She studied Shakespeare and elocution, attended lectures by national figures like Dwight Moody, and was present at gender- and racially inclusive meetings of the Knights of Labor. The diary further documents her anger at injustice and violence directed at African Americans, some of which touched Wells-Barnett directly, as in her forced removal from a railroad “ladies” car. She was also the godmother of a child whose father was murdered, along with two business associates, during a conflict in the spring of 1892. This triple lynching in Memphis was a life-changing event that directed her attention to full time antimob violence protest.
Ida B. Wells-Barnett organized against southern violence outside of the region, resulting in scores of local antilynching committees and the founding the National Association of Colored Women (1896) and the National Association for the Advancement of Colored People (1909). Her efforts successfully positioned antilynching as a legitimate focus of national reform, but based in the urban North. In that context, individuals and groups more securely positioned than she by academic credentials, social status, or political connections in publishing, philanthropy, and government assumed leadership of the issue in the World War I era. Although Ida B. Wells-Barnett’s southernness enabled her powerful voice to emerge in the 1890s, she became eclipsed by the competitive, money-driven, and consolidating trends that came to characterize social reform in the United States over her lifetime.