The Gammill Gallery in Barnard Observatory has a new exhibit of photographs by Pableaux Johnson.  The gallery, which hosts about four exhibits of documentary photography each year, is free and open to the public 9am to 5pm, Monday – Friday.

Pableaux Johnson is a writer and photographer based in New Orleans. His work has appeared regularly in the New York Times and Garden & Gun. Johnson is also the author of three books on Louisiana food culture and the founder of the electronic publishing company Blue Crab Labs.  View his website for more information.

Below, Pableaux’s artist’s statement for the exhibit. 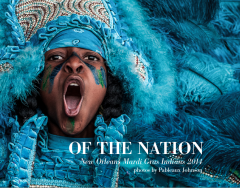 For a Mardi Gras Indian, it takes the better part of a year to build a suit.

A suit is an idea that takes shape as you build. Stitch by stitch through heavy-gauge canvas. Bead by tiny little bead. Stone by sparkling stone. Hunched over squares of thick cloth stretched on wooden frames. Making the needle dance with the goal of being “pretty pretty” on the streets come Carnival day.

As practitioners of century-old New Orleans street tradition, Indians spend countless hours constructing patches and crowns, with astonishing attention to detail and respect for both artistic expression and precision craftsmanship.

The intricate suits are the most immediately recognizable part of the tradition, but other aspects of “masking Indian”— community service, chants and song, ritual street confrontations, drums and dance—form the living core of Mardi Gras Indian culture in a time of change.

In 2014, cold rains all but cancelled Indian activities on Mardi Gras Day—the year’s sacred kickoff and time of unveiling—making the season’s other events (St. Joseph’s night, three Super Sunday daytime parades, Jazzfest performances) that much more important. The passing of several elders of the community—including Big Chief Larry Bannock of the Golden Star Hunters, Big Chief Paul Longpre of the Golden Blades, Flagboy Teral Butler of the Red Hawk Hunters, and Jack Green of the Red, White, and Blue—brought the community to the streets for mourning, celebrations, and final singing of the Indians’ spiritual anthem “Indian Red.”

These portraits represent moments from the streets and stages of New Orleans, 2014.

Below, a preview of photographs in the exhibit.  Click to view larger.