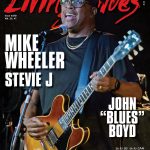 Living Blues #270 features Chicago bluesman Mike Wheeler. The guitarist has been building a career for himself for over 30 years. He plays his blues with ease and an obvious joy in what he is doing. Jackson, Mississippi–based Stevie J has been a go-to guitarist for gospel bands and blues acts in the City with Soul. After nearly a decade with Bobby Rush, Stevie J is now exploring his solo career. John “Blues” Boyd was born in Greenville, Mississippi, but his music career took nearly 50 years to get rolling. Now based in California, Boyd has two critically acclaimed records under his belt and is ready for an exciting post-pandemic career.

For more than 70 years, WDIA has played a central role in the life of African Americans in Memphis and North Mississippi. The first all-Black-oriented radio station in America, its role in popular culture cannot be underestimated. We take a look at the history of the “Sensation Station of the Nation.” This issue’s edition of Let It Roll features Bessie Smith. In 1929, Smith was at the peak of her popularity and prowess. We explore her appearance in the film St. Louis Blues and the history of this famous W.C. Handy song.

All of this plus the latest in Blues News, more than 50 record reviews, and the Living Blues Radio Charts!