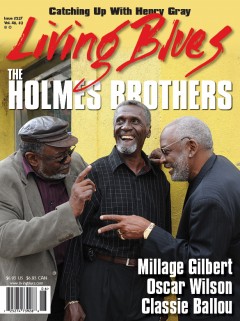 The June issue of Living Blues covers the Holmes Brothers in what has become their final interview. Sherman and Wendell Holmes and Poppy Dixon each speak and tell their story about their lives, music, and friendships in the blues world. Sadly, Wendell Holmes’ health has worsened and Poppy Dixon died soon after the interview’s completion. However, we are grateful to feature this retrospective—a compilation of interviews conducted over twenty-five years—to commemorate such an exemplary group of musicians.

The new issue also covers blues from all over the United States, from Kansas City’s Millage Gilbert to the Chicago-based Oscar Wilson, and Louisiana expatriate Classie Ballou. Living Blues also asks Henry Gray and A.J. Ghent (and band) each about their current projects.

Finally, Living Blues encourages its readers to vote in the 2015 Living Blues Awards by casting their ballots online, at www.livingblues.com.