This profile of Southern Studies faculty member Adam Gussow, by student Lana Ferguson, originally appeared in the Fall 2015 issue of the Southern Register. 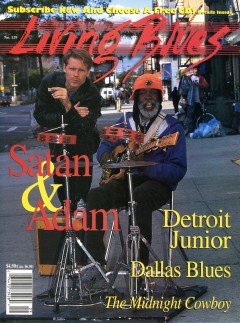 New York native Adam Gussow arrived on a hot and humid University of Mississippi campus in August of 2002, harmonica in hand. The Center for Study of Southern Culture was in need of a blues expert at the time, and he was exactly what they were looking for. Gussow said moving from Vassar College in New York state to small-town Mississippi was a big transition, but it was an ideal one.

“It looked like a really good fit,” Gussow said reflecting on his arrival to campus. “It was a great fit, the perfect job for doing what I liked to do: being a blues scholar and teaching American lit. Then, of course, I was a blues harmonica player, and it was Mississippi.”

Right away, Gussow began combining his interest in the blues with the Center’s outreach. From 2003 to 2005 he organized the Blues Today Symposium. “That was sort of the way I brought together my life as a musician with my life academically,” he said. He wanted the symposia to create conversations between more than the “usual suspects.” In particular, he wanted to push for cross-racial dialogue and wanted people who were passionately connected to the music in different ways to have public conversations.

Gussow’s passion for the music goes back to his childhood. He purchased his first harmonica when he was sixteen. He had always enjoyed listening to the blues, but the song “Whammer Jammer” by the J. Geils Band caught his attention his senior year for high school.

“I’d always liked the blues, but I got bit by the bug in a huge way that fall,” Gussow said. “I thought that I was so smart because I was the valedictorian-in-waiting. I figured that I should be able to get a harmonica and learn how to play that thing. Then everybody would think I’m cool instead of a nerd.” He said it was essentially the same as guys picking up the guitar to get girls. “Honestly, the things that lead us to pick something up at first are things like that. That’s not what ultimately connects you with it and keeps you going.”

Gussow would practice his harmonica playing for about ten years before meeting his first teacher. New York player Nat Riddles took Gussow in, jokingly referring to him as Little Cricket, and began mentoring him. 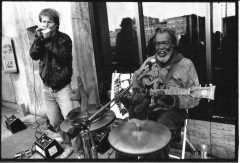 A few years later, in the fall of 1986, Sterling “Satan” McGee began to influence Gussow’s journey to becoming a blues performer. “It wasn’t until I started playing in the streets of Harlem with Sterling McGee that I really began to learn the music—to learn how to make it work as a performer,” Gussow explains. McGee and Gussow would go on to become the blues duo Satan and Adam, playing together for nearly five years. “So I had kind of a show business career,” he reflected. He said most of his greatest moments have been when he is playing with McGee.

Gussow and McGee’s first major performance was in Philadelphia at the River Blues Festival. When the duo arrived there was a massive crowd. “I said, ‘Who are they here to see?’ Someone said, ‘Don’t you know? They’ve been playing your CD all week on WXPN, and they’ve been calling you the find of the festival.’

“We were famous in Philly for about a year and a half. Much more famous than in New York or any other city,” Gussow laughed. “For some reason we became mini-stars in Philly, and for some reason I’ve always thought that was the moment we arrived.” The moment of arrival was important to Gussow because that is when he knew they were “making it.”

Gussow is still making things happen today. He is a part of a new duo the Blues Doctors, the other half of the band being UM psychology professor Allen Gross. Gussow said the group is very much a part-time thing doing occasional shows during the school sessions and more often in the summer.

Although he is on sabbatical this fall, next spring Gussow will teach Engl 324: The Blues Tradition in American Literature. He’s twice taught SST 598: Robert Johnson, the Devil’s Music, and the Blues. When he isn’t playing music or teaching, he’s following his passion somewhere else. His essay “‘I Got a Big White Fellow from Memphis Made a Deal with Me’: Black Men, White Boys, and the Anxieties of Blues Post-Modernity in Walter Hill’s Crossroads” was recently published in the August 2015 issue of the Arkansas Review. That article is part of his recently completed book-length manuscript, “Beyond the Crossroads: The Devil and the Blues Tradition.”

Another one of Gussow’s latest endeavors is his first novel, Busker’s Holiday. The book follows a young graduate student and his friend as they play music on the streets throughout Europe. “It’s my first and last novel. I’ve been working on it for a long time,” Gussow said. “It’s my book baby.”

In addition to performing the blues, teaching, and writing, Gussow is the subject of the in-production film Satan and Adam: A Documentary, which has been two decades in the making. The documentary includes clips and interviews that range back those 20 years. There is currently a campaign in progress on Indiegogo to raise money to complete the documentary that explores Gussow and McGee’s unexpected partnership. “They’ve been working on it for twenty years. I’ve given up hope on it so many times that I sort of stopped giving up hope. I sort of said, ‘I’ll just wait.’” A trailer for the film can be found online at www.igg.me/at/satanandadam.

Today Gussow passionately discusses his work and his busy life, but said the blues is more often meant to be an escape for people. “Blues is the place folks go to get away from critical thinking. This heavily rhythmic music that grabs them deep down,” he said. “Me too. Me too.”