With a heavy heart, we share the news of the passing of our dear friend and colleague Dr. David Wharton. Please join us, along with his family, for a closing reception for his photography exhibition “Roadside South” at Barnard Observatory on Sunday, Oct. 2 from 2-4 p.m.

When two of his University of Texas at Austin professors saw David Wharton’s first book, “The Soul of a Small Texas Town,” they remarked that in a just world, it would have won the Pulitzer Prize.  David Wharton would go on to publish four books in total. Each has its own unique perspective.  Steve Yarborough in the afterward of “Roadside South says” “Again and again in this fine book, Wharton sees things in a deeper, richer, more idiosyncratic manner than most of us are able to.”

David Gilmer Wharton was born on August 9, 1947, to the late William and Margaret Wharton. His family was from Greensboro, NC, but he spent most of his formative years in New Jersey. Earning his Bachelor’s Degree from Colgate University in Hamilton, New York, Dr. Wharton then continued his studies by obtaining his Master’s of Fine Arts in Photography and his PhD in American Studies from The University of Texas. In 1999, he moved to Oxford, MS, to teach at the Center for the Study of Southern Culture at the University of Mississippi, becoming the Director of Documentary Studies. Dr. Wharton was passionate about the South and enjoyed teaching his students about its culture and history. A gifted photographer, he documented the southern landscape and culture that he loved. Besides his four award-winning books of photography, his photographs were exhibited throughout the United States, Latin America, and Europe.  One of his greatest joys in life was taking drives through the south to make photos. This was second only to the joy he found in spending time with his wife and children. 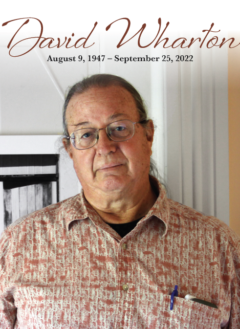