Brian Foster, Assistant Professor of Sociology and Southern Studies, is teaching Honors Southern Studies 102 this semester. The interdisciplinary course is structured as an examination of southern protest culture, and organized like a mixtape. See excerpts from his syllabus below. This is part of an occasional series in which we share syllabi from Southern Studies courses.

mixtape
/`mikstāp/
noun
a recording on a cassette tape, CD, or digital medium consisting of blended or recombined tracks, or a series of tracks with smooth transitions. 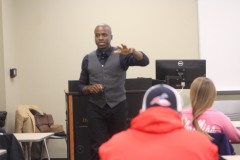 The American South is a riddle, a paradox—a region of tragedy and romance, violence and agape; a place of laughter and lynching, fried gizzards and sweet tea; home of Wallace and King, Hurston and K.R.I.T.; cathedral of southern belles, debutantes, and Bounce. This course interrogates the people and history of the South through a critical reading of the region’s protest culture(s)—Nina Simone’s “Mississippi Goddam,” Merle Haggard’s “I’m just a White Boy,” Beyonce’s “Formation,” and others. In the first section of the course, we will consider the conceptual foundations of “racism,” “race,” “regionalism,” and “protest.” We will then survey key events, figures, and epochs of southern history, from Slavery and Emancipation to Outkast’s audacious pronouncement—“the South Got Something to Say”—at the 1994 Source Awards. In the final section of the course, we will examine personal and alternative notions of protest. This course is highly interdisciplinary. We will consider perspectives from a variety of disciplines, from sociology to the humanities, and “texts,” from scholarly essays to popular culture.

This course is meant to help develop your: (1) capacity to engage issues related to racism, racial inequality, and social change; (2) awareness of the diverse people and complex histories of the U.S. South; (3) ability to critically assess and deconstruct the relationship between historical and contemporary social issues; and (4) understanding of interdisciplinary research methods. Beyond these, please take note of the general curricular goals put forth by the College of Liberal Arts.

Kreation—itself an homage to Mississippi-based rapper, Big K.R.I.T.—samples from an assortment of both southern- and non-southern-based protest music. The goal is to motivated students to address conceptual questions such as, “what is racism?” and “what constitutes protest?”

Epoch samples songs and performances that illuminate some aspect of southern history. Many of the linkages are obvious—they are written or performed by southern artists, focus on an issue or symbol endemic to southern culture, or problematize conventional narratives about the South and southern history. Students will critically engage each track, while also using the music as entre to a broader conversation about what was happening in the South—socially, culturally, politically, intellectually—at the time the song was made.

On the Aesthetic tape students begin/continue to grapple with “alternative” notions of protest, including their own approaches to resistance and social change.