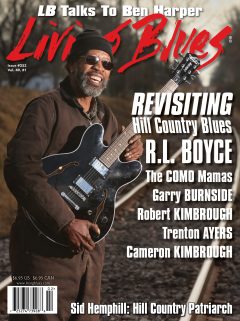 A preview of the new issue from Melanie Young.

Living Blues #253 (February/March 2018) is a special look at the current North Mississippi Hill Country Blues scene. Our cover artist, Grammy nominated R.L. Boyce, is one of the elders of the current Hill Country scene who first recorded behind fife and drum band leaders Otha Turner and Napolian Strickland in 1970. The Como Mamas, whose grandfather, Miles Pratcher, recorded for Alan Lomax in 1959, are three gospel singers (two sisters and a cousin) that capture the a cappella sounds of the Baptist Churches they grew up in in Como. Garry Burnside is the youngest of R.L. Burnside’s 14 children and grew up playing in his father’s band. Robert Kimbrough is the 49-year-old son of Junior Kimbrough, Cameron “Cam” Kimbrough is Junior’s 33-year-old grandson and the son of David Malone [Kimbrough], and Trenton Ayers is the 31-year-old son of Junior Kimbrough’s longtime bass player, Little Joe Ayers.

This issue’s historical article focuses on Hill Country Patriarch Sid Hemphill. Hemphill, born in 1878 (or 1876), Hemphill was the grandfather of Jessie Mae Hemphill and was the leader of the first African American fife and drum band ever recorded.

Subscriptions start at just $18.00 and can be purchased at www.livingblues.com.