She is the author of Eyes Off the Prize: The United Nations and the African-American Struggle for Human Rights, 1944-1955, which was published by Cambridge University Press and awarded both the Gustavus Myers and Myrna Bernath Book Awards; as well as, Bourgeois Radicals: The NAACP and the Struggle for Colonial Liberation, 1941-1960, which was also published by Cambridge.

Her third book, White Rage: The Unspoken Truth of our Racial Divide, won the 2016 National Book Critics Circle Award for Criticism and is also a New York Times Bestseller and a New York Times Editor’s Pick, and listed on the Zora List of 100 Best Books by Black Woman Authors since 1850. 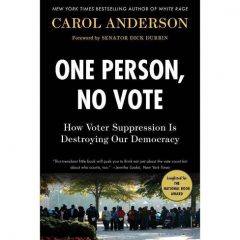 Her young adult adaptation of White Rage, We are Not Yet Equal was nominated for an NAACP Image Award.

She is a regular contributor to The Guardian and advisor for it yearlong series on voting rights.

Organized through the Center for the Study of Southern Culture, the African American Studies Program, Center for Civil War Research, and the Arch Dalrymple III Department of History, the Gilder-Jordan Speaker Series is made possible through the generosity of the Gilder Foundation, Inc. The series honors Richard Gilder of New York and his family, as well as Dan and Lou Jordan of Virginia.

As a result of the current health crisis, all events will be virtual, free, and accessible on the Center’s YouTube channel. Visit the Center’s website for up-to-date information about all Center events. Registration will be required for all events.