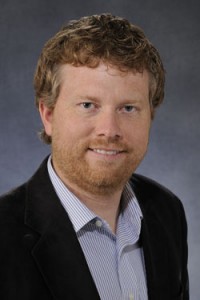 Dave Tell, who teaches history and the­ory of rhetoric courses on American public discourse in the Department of Communication Studies at the University of Kansas, discusses “The Emmett Till Memory Project” on Feb. 17.

“I provide a material and intellectual history of this infrastructure, and explain how the digital humanities may revolutionize how we remember Emmett Till,” Tell said. Since 2005, there has been a “memory boom” in the Mississippi the Delta: granting agencies have in­vested $5.5 million in the production of an Emmett Till commemorative infrastructure. He is the author of “Confessional Crises: Confession and Cultural Politics in Twentieth-Century America,” which ex­plains how the genre of confession has shaped some of the 20th century’s most intractable issues: sex­uality, class, race, violence, religion, and democracy.

Tell’s work focuses on the intersections of rhetorical theory and cultural politics. He teaches courses in the history and theory of rhetoric and in American public discourse, as well as  contemporary theory, the latter thought of Michel Foucault (1969-1984), rhetoric and spatial theory, public sphere theory, and public address. His work has been published in a number of national journals, including the Quarterly Journal of Speech, Rhetoric Society Quarterly, Rhetoric and Public Affairs, Philosophy and Rhetoric, Communication Studies,and Rhetorica.

Also in conjunction with Black History Month, “Goats and Chickens and Mice! Oh Maud! Afrofuturism and Rethinking the Human with Gwendolyn Brooks’s Maud Martha,” Thursday, Feb. 18 at 4 p.m. in Bishop Hall Room 105. Using Gwendolyn Brook’s 1953 novel Maud Martha, this talk applies pressure to encounters between human and animal to examine black female articulations of possibility within domestic (familial and national) spaces that seek to dehumanize and limit black female pleasure. The novel’s protagonist, Maud Martha, models imagination’s magic in granting mice and chickens some version of human dignity. This imaginative act compels us to consider how the national moral imagination might be reconfigured in its dealings with its black working-class female citizenry. This talk, then, considers the enduring question of what it means to be human, while also exploring how black women offer alternative and expansive modes for being human. Hosted by the Department of English, Department of African American Studies, and Sarah Isom Center for  Women & Gender Studies

Joseph Reiff will be at Off Square Books Friday at 5 p.m. to discuss his book “Born of Conviction: White Methodists and Mississippi’s Closed Society.” The book explores the theological and ethical understandings of the  “Born of Conviction” statement signed by 28 white Methodist pastors and gives an account of their experiences before, during, and after the statement’s publication. It also offers a detailed portrait of both public and private expressions of the theology and ethics of white Mississippi Methodists in general, as revealed by their responses to the “Born of Conviction” controversy.