This article by Rebecca Lauck Cleary originally appeared in the Winter 2017 Southern Register. 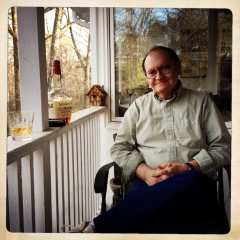 Charles Reagan Wilson’s international reputation as an expert on southern culture led to his selection for a fellowship in Germany last November.

“As an Obama Fellow, my responsibilities were to give a series of lectures at Johannes Gutenberg University in Mainz, at Johannes Gutenberg University in Gersheim, and at the Philipps-Universität Marburg,” said Wilson, professor emeritus of history and Southern Studies. “My lecture topics included ‘The American South in the Obama Era’ and ‘Trump’s South.’ That last one was the one stirring up the most interest. I also lectured on ‘Creativity in Southern Culture,’ ‘The Southern Way of Life,’ and ‘Religion in the Civil Rights Era.’”

Additionally, Wilson worked with graduate and undergraduate classes as part of the two-week Obama Fellowship.

In 2009, Wilson attended a conference at the University of Mainz on the topic of transnationalism in American studies and presented “The American South in Global Perspective.” He was also there two years ago for a conference titled Obama and Transnational Studies, presenting “Exploring the South’s Creole Identity: Life Writing from the US South in the Obama Era.” The papers from that conference were published in the fall of 2016 with the same title as the conference.

“From these experiences with the conferences and publications, I was invited by the newly established Obama Institute for Transnational American Studies at the Johannes Gutenberg–University of Mainz to be an Obama Fellow,” Wilson said. “Personally, the Obama Fellowship was a wonderful opportunity to present the South as a part of transnational studies to students and faculty at the University of Mainz, and we had very engaged discussions. I found much interest in the South,” Wilson said. “My wife, Marie, went with me, and we enjoyed exploring Germany, especially by train.”

Wilson’s main contact was professor Alfred Hornung, American studies chair in the Department of English and Linguistics at Johannes Gutenberg–University of Mainz, whom Wilson met during his first visiting professorship in Germany at the University of Würzburg in Northern Bavaria. The two were assistant professors then.

Of Wilson’s recent visit, Hornung said, “Charles’s lectures attracted a capacity crowd of students, staff, colleagues, and interested people from the city of Mainz, especially his lecture on Donald Trump and the South, which was very popular right after the American election.”

The Transnational American Studies Institute at the Johannes Gutenberg–University of Mainz, which will soon be officially named the Obama Institute for Transnational American Studies, offers a dynamic and wide-ranging program in both research and teaching for all students interested in topics related to the Americas in a global context. They study the fields of early American studies, indigenous studies, life writing/life sciences, political and intellectual history, film and media studies, religion and American culture, and materiality.

“The American Studies department at the University of Mainz has been the most ambitious and far-reaching program in Europe exploring transnational studies, and it has prominently featured the South in its projects,” said Wilson, who was director of the Center for the Study of Southern Culture from 1998 to 2007. “Professor Hornung has been to the Center several times, once bringing his Faulkner seminar from Germany to the Faulkner Conference, and then he was here at the university as a visiting scholar in 2006 and developed a deeper interest in the South.”