North Mississippi’s distinctive hill country music is the subject of this year’s Blues Today Symposium at the University of Mississippi. Set for Thursday, April 9 in the Blues Archive on the third floor of the J.D. Williams, the program examines the blues sound and culture of the region. 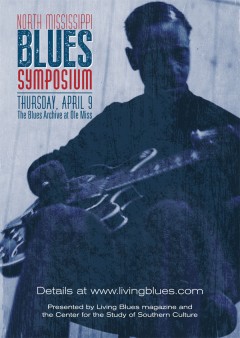 The event is free and open to the public, with musicians and music scholars especially encouraged to attend.

David Evans, director of the ethnomusicology/regional studies doctoral program of the Rudi E. Scheidt School of Music at the University of Memphis, delivers the keynote address at 1 p.m., “Sources of the Hill Country Blues.”

“I’ll be trying to explain how this distinctive blues sound came into existence and will illustrate the talk with examples from my previously unissued field recordings,” Evans said.

He is a specialist in American folk and popular music, particularly blues, spirituals, gospel and African American folk music. He is the author of several books, and produced more than 30 albums and CDs of field and studio recordings of music for the University of Memphis’s High Water Records. In 2003 he won a Grammy Award for “Best Album Notes.”

“Of course, any serious discussion of North Mississippi blues culture will draw upon the work of Dr. David Evans,” said Mark Camarigg, publications manager of Living Blues magazine, which is an institute of UM’s Center for the Study of Southern Culture. “I’m sure he’ll have much to say about Fred McDowell. In addition to a vast amount of research and writing, however, Dr. Evans has been instrumental in recording many North Mississippi artists, including R.L. Burnside and Junior Kimbrough, among others.”

George W.K. Dor will lead an 11 a.m. discussion on “Exploring Africanisms in Otha Turner’s Fife and Band Music as Recorded by Alan Lomax.” In 2014, University Press of Mississippi published his book “West African Drumming and Dance in North American Universities: An Ethnomusicological Perspective.”

“I believe the symposium audience will like listening to my perspectives as an Africanist as I share my readings that are partly informed by my West African cultural consciousness,” said Dor, the McDonnell-Barksdale Chair of Ethnomusicology and associate professor of music at the UM. “A major focus of the presentation is to redirect our imaginations to Otha Turner’s contributions as a key custodian to a genre of North Mississippi’s music culture.”

Camarigg said that Dor, whose work concentrates on themes of African music theory, African art music and creative processes, should provide an interesting perspective on music particular to the North Mississippi region.

Additionally, at 3 p.m. SouthDoc filmmakers Joe York and Scott Barretta will preview portions of their upcoming documentary feature film on Como, Mississippi’s legendary blues artist Fred McDowell. The duo will also discuss the process of documentary filmmaking. Greg Johnson, curator for the Blues Archive in the Department of Archives and Special Collections at the University of Mississippi, will highlight holdings in the archive, featuring numerous North Mississippi blues musicians.

“We wanted to showcase the documentary film work of SouthDocs and especially the important film Joe York and Scott Barretta are developing documenting the life and music of Como, Mississippi’s Fred McDowell,” Camarigg said.

The symposium coincides with Clarksdale’s annual Juke Joint Festival held April 9­–12, providing attendees an opportunity to see and hear dozens of musicians from the region. A full schedule of events, including performances by Jerron Paxton, Cedric Burnside and Jimbo Mathus and the Tri-State Coalition, is available at http://www.jukejointfestival.com/fest_events.php.

Posted in: Blues, Conferences and Symposia