Four decades ago, in a senator’s office in Washington, DC, a future bookstore owner learned more than just strategy and skill in a friendly poker game. It was during this card game that Richard Howorth met Bill Ferris, who would soon be the director of the Center for the Study of Southern Culture in Oxford.

But let’s back up a bit.

In 1977 Richard and Lisa Howorth were working at Savile Bookshop in Georgetown, gaining practical experience in order to open their own bookstore.

Bill Ferris, who then worked at the Center for Southern Folklore in Memphis, gave a presentation in the Senate, so Howorth and his card buddies attended. “We saw Bill’s film Hush Hoggies Hush and you can’t see that film and not love Bill Ferris,” Howorth said. 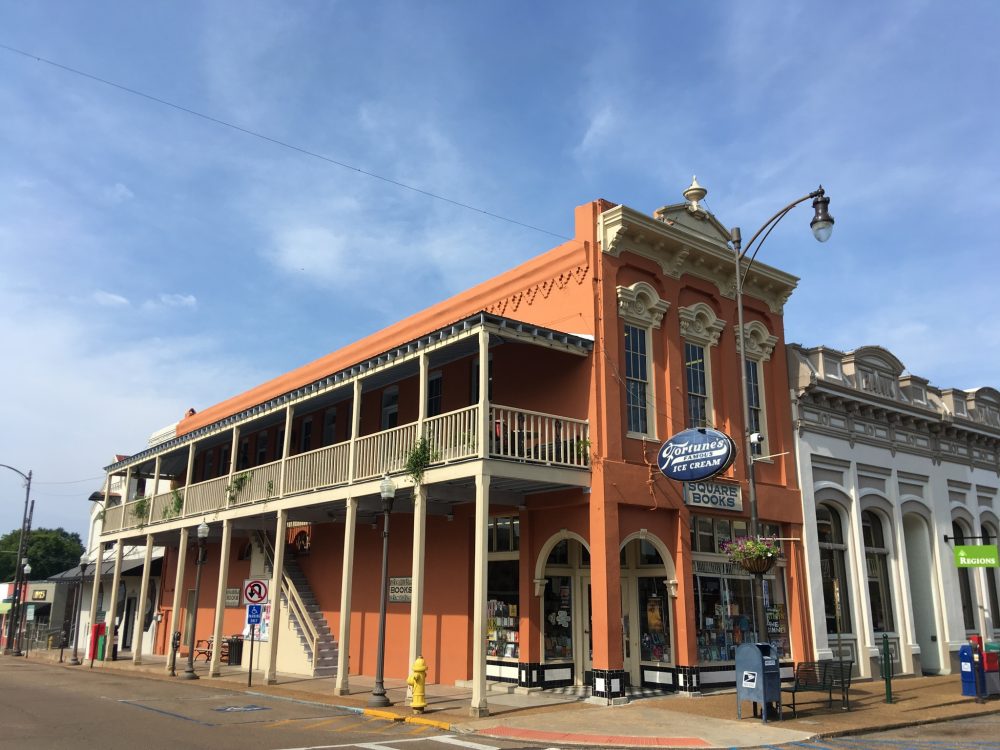 When they moved back to Oxford to open Square Books in 1979, Ferris had been named Center director, and they reignited their camaraderie. “From the very beginning, we had a lot of support from all these great people, many of whom were connected to the university, including Bill and Ann Abadie,” Howorth said. “Bill has such magnetism and he’s so brilliant; he is the kind of person who if you were a writer from the West Coast or Greece or China for that matter, Bill explained to you why you might want to come to Mississippi or to Oxford, and you would want to come.”

Attracting authors for events and book signings was an early aspiration for Square Books. The inaugural event took place in October 1979 for Ellen Douglass’s novel The Rock Cried Out. The second event was with Etheridge Knight, the African American poet originally from Corinth, Mississippi, who had taught himself how to write while he was in prison. Etheridge read at the Center and signed books at the store. Toni Morrison and Allen Ginsberg were also early visitors thanks to the Center and Square Books.

As both entities flourished, students played a critically important role on campus and in town. “The Center has attracted a lot of bright students from diverse backgrounds and from different places who are interested in books,” Howorth said. “I think the bottom line is, the mission of the Center and the mission of Square Books are pretty closely related. Since the day we opened we’ve had a core focus on books by southerners and books about the South and that remains true today.”

Avid readers Jimmy Thomas and Margaret Gaffney are two former Square Books employees who currently work at the Center. “The students and the faculty and all of the many people, individually and as a whole at the Center, have contributed so much, and Square Books always benefits from that,” Howorth said.

In 1997 Southern Studies graduate student and songwriter Caroline Herring, along with fellow local musician Bryan Ledford, came up with the idea to have a radio show, and Howorth suggested they could pair the musical component of the show with visiting authors. That turned out to be Thacker Mountain Radio, a weekly show featuring an author reading and music by a visiting band, as well as songs by the house band—a format that continues today.

“Thacker was another effort that involved the purpose of the Center, and we knew we would have southern musicians and writers and be a Mississippi thing, and it just took off from the beginning,” Howorth said. “I think it helped that we combined forces. Caroline and Bryan already had the people they knew who were interested in the music element, and we could publicize it with our mailing list, and it was the sort of thing that people enjoyed as the show grew.”

Lyn Roberts, general manager of Square Books, has watched the bookstore and the Center grow up together throughout the decades. “Over the years, Square Books and the Center have collaborated and supported each other, through serious scholarship and through fun times,” said Roberts, who has worked at Square Books since 1988. “The annual Oxford Conference for the Book being a notable example, but we’ve also held many events at Square Books for publications sponsored by the Center, such as the Encyclopedia of Southern Culture and The Mississippi Encyclopedia, as well as for staff and faculty there. We’re friends in an intellectually and culturally curious neighborhood, and our mutual support and appreciation has certainly benefited Square Books and the Center well.”

The Oxford Conference for the Book started in 1993 thanks to the efforts of Howorth and Ann Abadie. Its original idea—one that continues today—was to bring poets, novelists, journalists, and scholars to Oxford and to the university to celebrate the written word. The event is now the primary outreach focus of the spring semester for the Center.

“Thanks to others, Charles Wilson and Ted Ownby and the many people who have worked there, the Center is not simply a thing about the South,” Howorth said. “It is a locus of academic excellence, and that is good for the university and good for the intellectual life of the community.”

Written by Rebecca Lauck Cleary for the Fall 2019 issue of the Southern Register.