R.L. Burnside at home in Independence, Mississippi, shot by Alan Lomax,
Worth Long, and John Bishop in August, 1978.

Dr. Darren Grem is currently teaching History 399, a Wintersession course on Southern Music History. He created a playlist representative of different genres, and students are listening to the songs before class. Darren has asked the students to treat each song as a text—just as they would a book or article—with the instruction to “pay attention to not only how it sounds but what those sounds might be trying to convey to us – over either years or decades or centuries – about the people who made them and enjoyed them (or hated them or dismissed them) in their given context.” 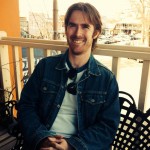 Darren Grem is Assistant Professor of History and Southern Studies. He began teaching at UM in the fall of 2012. His book Corporate Revivals: Big Business and the Making of the Evangelical Right is under contract with Oxford University Press.

“Soar Away” (Sacred Harp/Shape Note Sing) by Cades Cove Primitive Baptist Church
“I’m a Poor, Wayfaring Stranger,” performed by the Indian Bottom Association of Regular Baptists
“Oh Lord, I Am Your Child,” Elder Otis Jones, Pentecostal sermon and impromptu song, 1936
“This Little Light of Mine,” traditional black choir gospel
“This Morning When I Rose,” Mississippi Mass Choir
“What a Friend We Have in Jesus,” Roberta Martin Singers
“Life’s Railway to Heaven,” performed by the Gaithers and Oak Ridge Boys
“I’m Gonna Leave You in the Hands of the Lord,” performed by Five Blind Boys of Mississippi
“Just a Little Talk With Jesus,” performed by the Million Dollar Quartet (Elvis, Johnny Cash, Carl Perkins, and Jerry Lee Lewis)

“Terraplane Blues” by Robert Johnson
“Death Letter” by Son House
“My Black Mama” by Son House
“I Asked Her for Water” by Howlin’ Wolf
“44 Pistol” by R.L. Burnside
“How Blue Can You Get” by B.B. King
“I’m Bad Like Jesse James” by John Lee Hooker
“Champagne and Reefer” by Muddy Waters with The Rolling Stones

“I’m Nine Hundred Miles from Home,” by Fiddlin’ John Carson
“Little Mary Phagan,” by Vernon Dalhart
“No Depression in Heaven” by The Carter Family
“If the River Was Whiskey” by Charlie Poole
“In the Jailhouse Now” performed by Jimmie Rodgers
“Cold Cold Heart” by Hank Williams
“Blue Moon of Kentucky” by Bill Monroe
“Stay a Little Longer” by Bob Wills and His Texas Playboys
“Folsom Prison Blues” by Johnny Cash

“I Got a Woman” by Ray Charles
“Change Gonna Come” by Sam Cooke
“Respect” by Otis Redding
“Respect” by Aretha Franklin
“Green Onions,” Booker T and the MG’s
“Soul Man” Sam and Dave
“Mississippi Goddam” by Nina Simone
“I’m Black and I’m Proud” by James Brown
“Get Up (I Feel Like Being a Sex Machine)” by James Brown