The Devil’s Music: Adam Gussow Publishes New Book on the Devil in the Blues 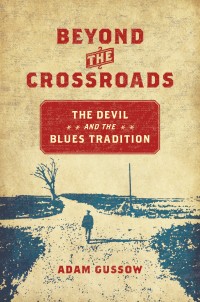 This interview by Scott Barretta originally appeared in the Fall 2017 Southern Register.

Adam Gussow is an associate professor of English and southern studies at the University of Mississippi whose latest book is Beyond the Crossroads: The Devil in the Blues Tradition (University Press of North Carolina), a survey that occupied seven years of research. Gussow has also grappled extensively with the devil in his parallel career as a professional blues musician—for over thirty years he’s recorded and toured internationally with Sterling “Mr. Satan” Magee, a relationship he addressed in his memoir Mr. Satan’s Apprentice.

In his new book Gussow explores a remarkably wide range of literature, addressing blues songs about the devil from the ’20s to the present, as well as expressions of the supernatural in West African cultures among enslaved African Americans in the decades between Emancipation and the birth of the blues. Much of Gussow’s previous work has been squarely in literacy criticism, but here he draws considerably from sociological community studies by scholars including Hortense Powdermaker, John Dollard, and Charles S. Johnson. They all addressed a growing cynicism among southern African American youth in the first half of the twentieth century—the cohort of Robert Johnson—about older generations’ notions of the devil and hell.

I asked Gussow about some of his most provocative arguments.

Scott Barretta: What’s the significance of your title, and what is it that you are going “beyond”?

Adam Gussow: People who know nothing else about the blues know about Robert Johnson and the crossroads, and they’ve heard that phrase “the devil’s music.” I wanted to understand that phrase and where it comes from, what it meant to people who use it.

And when I looked at the full range of blues songs that evoke the devil and hell I found most of those are not about the crossroads—there are songs that say “I am the Devil.” There’s the devil showing up in a range of places that have nothing to do with selling your soul, and they’re not just southern places.

SB: You also challenge prevailing conceptions of the devil in the blues.

AG: One important thing I had to do was to figure out to what extent was the devil of the blues the Christian devil, to what extent it shifts from the slavery to the post-slavery period, and to what extent African source material is showing up in this blues devil. Contemporary scholars coming from an African American studies perspective such as Samuel Floyd, in a weird way they’re of a piece with the Robert Johnson scholars—they want the blues devil to be Legba, something inherited from a particular [Yoruban] cultural region.

I do make an argument that Legba shows up in some blues songs, but other songs are coming from a very different place. The devil is a shape shifter, and we should not be surprised that the devil shows up in a number of guises.

SB: The stereotypical crossroads imagery is of a male in the countryside, but you argue that the notion of the devil in the blues was developed by women in urban settings during the roaring ’20s.

AG: Victorians were looking down at these young people, the flappers, the lost generation in the aftermath of World War I and saying they’re going to hell. It’s a cynical thing—the devil is a figure that the younger generation takes not as something to be afraid of, but something to embrace, the devil as a kind of master of the revels.

I talk about the very first devil’s blues, “Done Sold My Soul to the Devil,” by Clara Smith, a migrant from the South, in 1924: “I’ve got lots of gold, got it from the devil, but he won’t let me alone / I’m stubborn and I’m hateful, I’d die before I run / I drink carbolic acid, and I totes a Gatling gun / I’ve done sold my soul, sold it to the devil, and my heart done turned to stone.”

What kind of lesson is here? What I argue is that it’s a kind of northern migrant version of the blues idea, that you can create an identity by going bad all the way. But it’s also positioned relative to a conversation about imperiled black female virtue, about what happens to young black migrant women from the South when they get to the big cities. And what’s important about the song is that, on the one hand, she’s voicing it with a kind of sadness, but on the other hand she’s proclaiming it.

SB: Another use of the devil is political, a coded way of talking about the white man or the system of segregation.

AG: I argue that this comes from slavery. If you go back and look at the spirituals, what struck me was the concreteness of the metaphors, how the devil was a figure who was chaining you, who was apprehending you in the woods, how these songs were a coded way of invoking the patrollers. And what interested me were the continuities between that and what goes on in the Jim Crow South—you had to maintain the code. I talk about plausible deniability.

And I look at a couple of specific songs. For me the most resonant one is “Hell Ain’t But a Mile and a Quarter,” the Big Bill Broonzy song, which I talk about being a coded invocation of a black man’s voyage across the tracks, about what it’s like to go into a Jim Crow town—hell is right there, it’s just a mile and a quarter away. If you’re Big Bill Broonzy, you couldn’t say out loud, “The white man’s the devil.” And when Big Bill says “next thing I do, I want to marry the devil’s daughter”—in interviews he would say that the only way the southern black man could get back at the white man is to take the white woman. If I’m right, that’s a pretty provocative thing to say.

SB: In the fourth chapter you address how the devil is evoked in response to the new freedoms experienced by African Americans in the wake of Emancipation.

AG: I talk about the way that the devil ends up mediating post-slavery romance. As Angela Davis says, travel and sexuality become very important themes in the blues, because after Emancipation African American men and women are free to travel and to choose one another. I say the reason the devil comes into the conversation is because you’ve got freedom.

There’s a category of songs in which men are bemoaning their women’s faithlessness, they’re bemoaning other men coming in and trying to take their women, which is to say other men behaving like devils. And I talk about it from the women’s perspective, women complaining about their men. Bessie Smith’s “Devil’s Gonna Get You” is a good example of that. She says, “the devil’s gonna get you” when a man has disappointed her, when a man has been out playing around, spending himself with other women. And she’s talking like a minister—“the devil’s gonna get you, just as sure as I am born.”

SB: You argue that Robert Johnson can be seen as a “young modern” who, like the flappers, rejects the superstitions of the older generation.

AG: It’s pretty clear that they way Johnson learns the blues isn’t through the intercession of the devil and selling his soul, but through living with Ike Zimmerman, who is four years older than him, for six to nine months. Zimmerman’s daughter says that her daddy used to go practice in the graveyard across the street, and when he came home he’d say, “I’ve been playing for the haints,” the evil spirits, and then she said we’d all have a big laugh about that.

Robert Johnson eventually does his version of the same thing. The second stanza of “Hellhound on My Trail” has a clearly comic sound to it; his vocal tone is completely different than a man who is tormented. “If today was Christmas Eve, and tomorrow was Christmas Day / Aw, wouldn’t we have a time, baby?” What he’s saying is the on the two holiest days of the year he’d spend forty-eight hours in the sack with his rider. He’ll say I’m poor Bob, poor beleaguered Bob, but then he’s winking and going, “Oh baby, wouldn’t we have a time?”

SB: You took off your English professor hat and put on the investigative reporter hat to address blues tourism in Clarkdale, notably the genesis of “the crossroads” marker at the intersection of Highways 61 and 49.

AG: I wanted to understand everything I could about that location called “the crossroads” in contemporary Clarksdale, to find out if there was any reason to think Robert Johnson had any connection to that location. And what started the ball rolling was the minutes of a meeting between the mayor and the board of commissioners in which the city attorney drafted a resolution that would lead eventually to a law in 1999, and it used word the devil twice—basically, “Be it resolved that Robert Johnson sold the soul at our crossroads.”

There will be a publication party this Sunday at Levon’s in Clarkdsale from 3:30 to 6:30 PM, and he’ll appear on Thacker Mountain Radio October 12. Other events include

10/2/17:   Cleveland, MS – Delta State University (paper on Clarksdale’s “The Crossroads” presented at the International Conference on the Blues, time TBA)