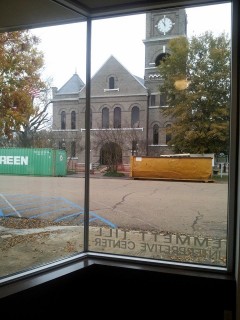 In 1955, the Sumner County Courthouse was the site of the acquittal of Roy Bryant and J.W. Milam, who both soon after confessed to the murder of 14 year old Emmett Till.  The courthouse, which has been under renovation, will open to the public on March 21 with a special ceremony and show by Thacker Mountain Radio.  Also on the Sumner square is the new Emmett Till Interpretative Center.

Southern Studies alumnus Patrick Weems has worked with the Emmett Till Memorial Commission for several years. Find him here in a Jackson Free Press story about Mississippi’s young activists. Learn more about the event below from the official press release:

The Emmett Till Memorial Commission of Tallahatchie County would like to invite the public to a free program featuring a ceremony, entertainment and reception at the newly restored Sumner Courthouse and Emmett Till Interpretive Center.

The Emmett Till Memorial Commission (ETMC) was the idea of the late- Jerome Little, the first African-American president of the Tallahatchie County board of supervisors. The restoration of the courthouse and opening of the Emmett Till Interpretive Center is part of a larger vision that the ETMC set in motion in 2007 to foster racial reconciliation.

The Thacker Mountain Radio Hour will perform a special show in Sumner, MS on Saturday, March 21 at 2 pm as part of the activities to commemorate the opening of the newly restored Tallahatchie County Courthouse. Guests for the one-hour program, to be held in the courtroom of the courthouse, will be R&B singing legend Dorothy Moore, Pulitzer Prize winning-photographer Alysia Burton Steele and the Tutwiler Community Center Student Blues Band. Admission is free and the show will be recorded to be later aired on Mississippi Public Broadcasting. Hosts of the show will be Oxford writer Jim Dees and the Thacker house band, the Yalobushwhackers led by Delta musician/instructor, Dr. Alphonso Sanders. The Thacker Mountain Radio Hour can be heard in the Sumner area every Saturday at 7 pm on 90.9 FM Greenwood.

Dorothy Moore hails from Jackson, Mississippi. Her professional accolades began in 1976, when her recording of “Misty Blue” went to No.1 on the R&B charts (No. 3 Pop), and is currently featured in the movie “Black or White”. Her later hits included “Funny How Time Slips Away” and “I Believe You.” In 1986, she released a well-received gospel album, “Giving it Straight to You” (Word Records). This was followed by a tour of Japan in 1989 with, among others, Delta saxophonist Charlie “Love” Jacobs. Heart (2013) on Farish Street Records is her latest album.

Dorothy Moore has earned many awards, including five Grammy nominations, an Image Award, NATRA Female R & B Vocalist of the Year, a Billboard Magazine Award, and a Governor’s Award for Excellence in the Arts (1996). She was inducted into the Mississippi Musicians Hall of Fame in 2001. Her most recent CDs include, “Gittin Down Live” (Farish Street Records 2003) and “I’m Doing Alright” (Farish Street Records 2005).

Alysia Burton Steele shared a 2006 Pulitzer Prize with the Dallas Morning News team, where she was picture editor. She is currently an assistant professor at the University of Mississippi School of Journalism and New Media. Her photography book, Delta Jewels: In Search of My Grandmother’s Wisdom (Center Street) was inspired by memories of her beloved grandmother, and combines heart-wrenching narrative with poignant photographs of more than 50 female church elders in the Mississippi Delta including, Lela Bearden and Herma Mims Floyd of Sumner.These ordinary women lived extraordinary lives under the harshest conditions of the Jim Crow era and during the courageous changes of the Civil Rights Movement. With the help of local pastors, Steele recorded these living witnesses and shares the significance of being a black woman–child, daughter, sister, wife, mother, and grandmother in Mississippi–a Jewel of the Delta.

Dr. Alphonso Sanders is a multi-instrumentalist and Director of the BB King Recording Studio at Mississippi Valley State University in Itta Bena. He has been involved in music education for over 25 years as an educator and performer. He has played the world’s premier jazz and blues festivals including Switzerland’s Lucerne Blues Festival and Montreaux Jazz Festival, and the North Sea Jazz Festival in the Netherlands. As a Fulbright Scholar, Dr. Sanders studied in China, visiting 12 major cities as he explored the culture of Chinese music and visual arts. Sanders’ CDs include, Mississippi Influences (2009) and Twice As Nice with Bill “Howl-N-Madd” Perry (2010).

The Tutwiler Community Center Student Blues Band is made up of students who attend the “Sonny Boy Club” at Tutwiler Education Community Center. The Sonny Boy Club, named for the late blues legend, Sonny Boy Williamson of Tutwiler, is made up of some 40 students who meet twice a week at the center to take instruction from volunteers in the basics of the blues. Music is one of many programs offered at the Center through the generous support of donors. Other programs include poetry, photography and a computer lab. The student blues band made their debut last year. To donate to the community center visit www.tutwilercenter.org.

In addition to its Saturday radio broadcast, the Thacker Mountain Radio Hour can also be heard every Saturday at 7 pm online at http://www.mpbonline.org/programs/radio/listen-live/. More information on upcoming shows is available at the show’s website, http://thackermountain.com/. Photos from past shows can be found on the show’s Facebook page and podcasts can be heard on the show’s Soundcloud page at https://soundcloud.com/thackermountain.

After the Thacker Mountain Radio hour, the co-chairpersons of the Emmett Till Memorial Commission, Frank Mitchener and John Wilchie will lead the audience in a short dedication of the Sumner Courthouse. This will include remarks by Timla Washington, aide to U.S. Congressman Bennie Thompson and U.S. Senator Thad Cochran, whose leadership helped secure the first funding for this project.

More about the Emmett Till Memorial Commission can be found at our website http://www.etmctallahatchie.com/pages/resolution.htm and pictures of the courthouse and Emmett Till Interpretive Center can be located at our facebook page https://www.facebook.com/ETICtallahatchie.