This article, by Rebecca Lauck Cleary, originally appeared in the Fall 2016 issue of the Southern Register. 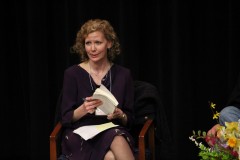 This fall Kathryn McKee teaches the Southern Studies 598 Special Topics class. Women and the South, which meets Mondays at 1:00– 3:30 p.m., investigates the intersection of constructed ideas about place with constructed ideas about gender and race. In pairing “the South” and “Woman,” the class will inevitably hit one of the most famous markers of regional exceptionalism: “Southern womanhood.” McKee’s class seeks to trouble that term through a series of boundary crossings that subject conventions of place and conventions of gender to academic scrutiny.

“We are examining the past and seeing how the geographic idea of the South, as well as gender identity, have changed in the present,” McKee said. “We live in a moment where they still intersect, but we’ve moved away from narrow definitions of both.”

In addition to reading about the perils and politics of representation, primarily through the disciplines of history and literature, the views of everyday women and their lived experiences in “the South” are the focus of an interview project. The class will read mainly secondary texts, including works by Judith Butler, Tara McPherson, Patricia Yaeger, Micki McElya, Rebecca Sharpless, Elizabeth Engelhardt, Tera Hunter, and Gloria Anzaldua.

The class will expose students to various disciplinary and methodological strategies, provide them with a context for understanding both traditional approaches to regional study and recent paradigm shifts within the field of Southern Studies, and complicate simplistic reductions of region, gender, and race.