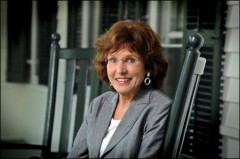 The 2014 Gilder-Jordan Lecture in Southern Cultural History will take place on Wednesday, September 24 at 7pm in Nutt Auditorium on the University of Mississippi campus. This year’s lecturer will be Jacquelyn Dowd Hall of the University of North Carolina, and she will present “How We Tell About the Civil Rights Movement and Why It Matters Today.”

Jacquelyn Hall’s research interests include U.S. women’s history, southern history, working-class history, oral history, and cultural/intellectual history. She is the founding director of the Southern Oral History Project, and has served as a leader or member of the Organization of American Historians, the Southern Historical Association, and the Labor and Working Class History Association.   In 1997 she received a John Simon Guggenheim Fellowship, and she was awarded a National Humanities Medal in 1999 for her efforts to deepen the nation’s understanding of and engagement with the humanities.

Dr. Hall’s Revolt Against Chivalry: Jessie Daniel Ames and the Women’s Campaign Against Lynching was a landmark work of southern gender history. Her co-authored Like a Family: The Making of a Southern Cotton Mill World explored labor and community formation in the textile South. Dr. Hall is currently working on a book about women writers and intellectuals and the refashioning of regional identity in the twentieth-century South, and another project explores the social movements generated by civil rights activism.

In a 2005 article in the Journal of American History, Hall coined the phrase the “long civil rights movement,” and advanced an understanding of a dynamic movement not bound by 1954’s Brown v. Board and the Civil Rights Act of 1965. Hall looked to the rise of the Left in the 1930s as the foundation of the movement, and extended its conclusion beyond the landmark legislation of the 1960s to the 1970s and the genesis of other social movements concerned with equality in terms of economics, gender, and sexuality. To further this expanded definition of the movement, Hall also considers the forces resisting civil rights efforts, a focus that laid the groundwork for scholars in the 2000s studying the conservative response to political activism.

Organized by the Center, the African American Studies Program, Center for Civil War Research, and the Department of History, the Gilder-Jordan Speaker Series is made possible through the generosity of the Gilder Foundation, Inc.  The series honors Richard Gilder of New York and his family, as well as his friends, Dan and Lou Jordan of Virginia.

Past Gilder-Jordan lecturers have been Barbara J. Fields of Columbia University, David Blight of Yale University, Grace Elizabeth Hale of the University of Virginia, and Walter Johnson of Harvard University.