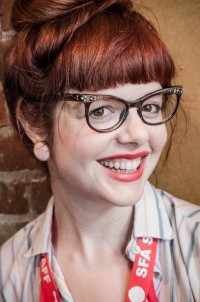 This article, by Sara Camp Arnold, originally appeared in the Summer 2014 Southern Register.

Lindsey Reynolds, a Southern Studies graduate student and Nathalie Dupree Graduate Fellow with the Southern Foodways Alliance, received a grant from the Julian and Kathryn Wiener Endowment to fund her summer internship at Garden & Gun magazine in Charleston, South Carolina.

Reynolds is completing a 10-week editorial internship at Garden & Gun, a magazine of Southern culture and lifestyle with a nationwide circulation of 200,000.

“I’m enjoying the blend of old-school print journalism and the new world of digital storytelling,” said Reynolds. “My responsibilities include attending weekly staff meetings, brainstorming new theme issues, Southern pop culture quizzes, and research, research, research. I’ve learned about everything from the region’s oldest bookstores to its newest breweries to trends in Southern funerals. No day is ever dull. I couldn’t be here in Charleston without the support of the Center and the Wiener grant. I’ll be using what I’ve learned at Garden & Gun for my internship thesis as well, examining foodways, pop culture, media, and the Global South.”