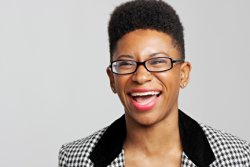 In honor of our Friday conversation and concert with Marco Pavé and Alfred Banks, we’re going to share some articles by scholars who do work on hip hop. Up first, Zandria Robinson’s entry on “Crunk and Hip-Hop” for the Urbanization volume of the New Encyclopedia of Southern Culture, published in 2010. Robinson is Assistant Professor of Sociology at Rhodes College. Author of This Ain’t Chicago: Race, Class, and Regional Identity in the Post-Soul South, she was a professor of Southern Studies and Sociology at the Center from 2009 to 2012.

Southern crunk music, known for group chants, call-and-response, and rapidly punctuated rhythms and bass, is the centerpiece of mainstream southern hip-hop. The music, which gained significant and widespread attention in the late 1990s through the works of various groups, including Memphis’s Three-Six Mafia and Atlanta’s Lil’ Jon and the Eastside Boys, thrust the urban South squarely into popular culture. While most dictionary definitions of the term express uncertainty about its etymology, “crunk” is most likely a southern articulation of “cranked up.” Getting cranked up, or getting crunk, involves not only the proper rhythms, words, and sounds, but also appropriate dances: buck-jumping, a high-energy jumping, bouncing, and elbow throwing dance; gangsta walking, a rhythmic, posturing stomp characterized by alternating feet and forward or in-place motion; juking, an improvised combination of moonwalking and breakdancing usually done competitively; or snap-dancing, done to a particular form of southern crunk characterized by a snaplike snare, or sometimes a synthesized sample of snapping fingers, on the third beat of each 4/4 measure, in which performative and improvised body leans, coordinated with leg and arm movements, are interrupted by an emphasized snap on the third beat. As southern crunk has gained popularity, the chanted commands have become more violent and confrontational, and the accompanying dances have become more sexualized. The genre has faced admonishment for its vulgarity and lack of refinement, particularly in relation to hip-hop in other regions and hip-hop historically. While critics charge that the music simply introduces and encourages a regionalized form of violence into hip-hop culture, others argue that the physical release provided and inspired by the shouting, confrontation, and high-energy movement of southern crunk is a postindustrial parallel to the function of the Jim Crow-era juke joint, facilitating the cathartic dismissal of aggression, rage, and sorrow endemic to the experiences of marginalized urban youth.

The sounds of southern artists, while influenced by rap sounds emerging from the East and West coasts, were distinct in that they were directly infused with elements of African American culture that had endured from slavery to the post–civil rights era, relatively unchanged, in the black South: field hollers, call-and-response, blues rhythms, and bass lines. While hip-hop artists on the East and West coasts sampled southern rhythm and blues songs for the melodic bases of their songs, southern artists were integrating postindustrial, post–civil rights urban experiences and sounds into these predominantly black and/or rural southern musical and expressive traditions. Crunk music emerged largely from this synthesis of black and/or rural musical and expressive traditions with the regionalized and place-specific experiences of the urban South by black southern youth.

As one of the most expansive global phenomena of the post–civil rights era, hip-hop culture has influenced the everyday language, modes of engagement, and cultural practices of a broad cross section of world citizens. With genealogical roots that can be reasonably traced back to West African communicative and expressive practices, contemporary hip-hop culture has evolved in much the same syncretistic pattern as many African American cultural forms. The popularity of the culture and its consequent commodification, corporatization, branding, and proliferation is continuously at the center of authenticity debates about the culture. Similarly, mainstream hip-hop’s links to and oft-descriptive engagement of urban crime, violence, and vice are serially implicated as causal in a host of social problems facing contemporary youth in America. Yet, both in spite and because of hip-hop’s global popularity and increasing presence in myriad dimensions of everyday life, the culture’s focus on the local, and in particular urban neighborhood contexts, persists. While hip-hop culture was, from its historiographic outset in the Bronx, N.Y., self-consciously concerned with place and urban place-based issues, dogged senses of place attachment and ownership multiplied and intersected with authenticity debates to produce the bicoastal lyrical and sometimes physical battles that by the 1990s had come to overshadow if not define urban places outside of Los Angeles, Oakland, and the San Francisco Bay Area, New York, and, to a lesser extent, Philadelphia. It was within this moment of heightened tensions between the East and West coasts that a veritable “third coast”—the American South—gained significant attention from listeners outside of the region and major record labels, ultimately challenging the hegemony of the clusters of large urban centers that came to be symbolized by New York and Los Angeles, respectively.

The success of crunk music also parallels a widely held and oft-articulated sentiment by southern hip-hop artists that rap has finally “come home” to the South, not unlike the African American populations that have been migrating or “remigrating” to the South since 1970. Further, the mainstreaming of crunk music created the space for southern hip-hop artists to situate the urban South, both narratively and visually, as the setting for a number of situations that were both familiar to urban minorities across the globe yet regionally distinct. Several black southern films, including Craig Brewer’s Hustle and Flow (2005), Chris Robinson’s ATL (2006), and Bryan Barber’s Idlewild (2006), tell a story of black life in the urban South. Collectively, these films, in part because of the success of crunk music, legitimate and authenticate the region’s participation in hip-hop culture by highlighting regional distinctiveness and universal cultural and experiential commonalities.

In the battle for representation in mainstream hip-hop, the “third coast’s” crunk music compelled national and global recognition of the urban American South. As the sound has reached a critical point of replicability, and perhaps a critical saturation in popular culture, more artists with far less longevity than their predecessors, or the crunk sound, will emerge. Further, southern crunk may continue to be the category into which all southern hip-hop artists are grouped, regardless of their respective differences. Nonetheless, the music will likely continue to foster discussions of race, urbanism, regional difference, and popular culture.