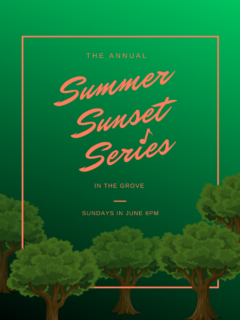 There will be four Summer Sunset Series concerts in June, with the Center for the Study of Southern Culture sponsoring the Sunday, June 13 event at 6 p.m. with James “Super Chikan” Johnson, a blues musician based in Clarksdale, Mississippi.

June 6 – The Soul Tones sponsored by the Yoknapatawpha Arts Council

June 20 – Blackwater Trio sponsored by the University of Mississippi Museum

The Center for the Study of Southern Culture and Yoknapatawpha Arts Council partner for the premiere of Mississippi Creates, an event that pairs musical performance with short documentary films, providing a glimpse into the creative life and environments of two local musicians: Tyler Keith and Schaefer Llana. This pair of films is part of a larger series that highlights artists and performers who have been influenced or inspired by the culture and sounds of Mississippi. The screening includes a live musical performance by Schaefer Llana and will be followed by a brief Q&A with the musician and film directors Annemarie Anderson and Kelly Spivey. This event is free to the public and open to all ages. Bring your own chairs and refreshments.

Annemarie Anderson is the oral historian for the Southern Foodways Alliance. She manages and conducts oral history work throughout the South. At age 10 Schaefer Llana moved from St. Louis, Missouri, to Batesville, Mississippi, where she learned to play piano and guitar. Kelly Spivey is a documentarian living and working in Memphis, Tennessee. She holds a BFA in photography from SCAD, and both an MA in Southern Studies and an MFA in Documentary Expression from the University of Mississippi.

Mississippi Creates is made possible by Cathead, the Center for the Study of Southern Culture, and the Mississippi Humanities Council. Doors at 7:30 p.m., show starts at 8 p.m. 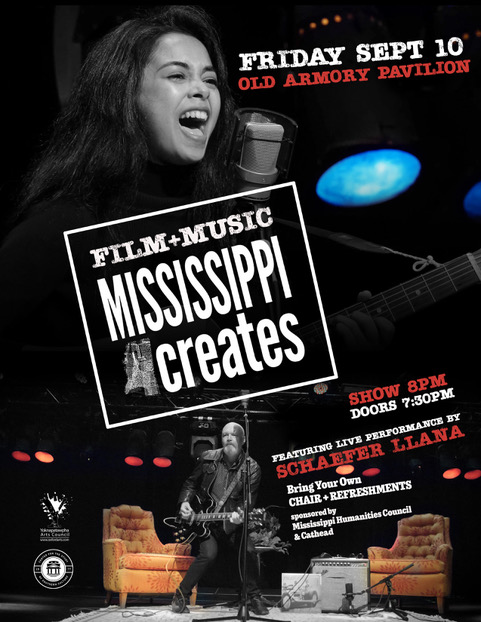 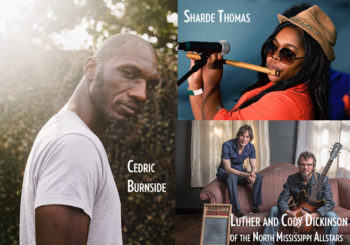 Voices of Mississippi is a new multimedia event celebrating the music, art, and storytelling traditions of the people of Mississippi. Based on the 2019 multi-Grammy Award–winning box set “Voices of Mississippi: Artists and Musicians” documented by William Ferris, director emeritus of the Center for the Study of Southern Culture, the program features live musical performances by blues and gospel musicians including Cedric Burnside, Luther and Cody Dickinson of the North Mississippi Allstars and Sharde Thomas. The live music is integrated with archival film, audio recordings, and photographs by folklorist William Ferris.

A historian with an egalitarian perspective, Ferris grew up in Vicksburg, Mississippi where he began documenting artists and musicians in his community. From the 1960s through the 1990s, Ferris preserved an invaluable archive of cultural and musical recordings, and much of that art and humanity will be shared in this profound concert experience.

With a broad array of blues, folk, gospel music, and spoken-word storytelling, Voices of Mississippi paints a powerful picture of a time and place that remains an essential piece of the American cultural landscape. 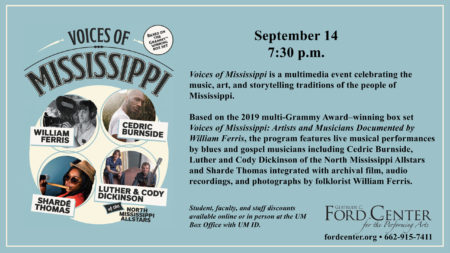 On Wednesday, Oct. 6 at 7:30 p.m. at the Gertrude Ford Center for the Performing Arts, in a production of “The Fannie Lou Hamer Story,” Mzuri Moyo Aimbaye channels Fannie Lou Hamer in a riveting 60-minute journey of storytelling showered with eleven inspiring songs and a video montage of the civil rights movement.  The Fannie Lou Hamer Story is part of the Ford Center’s Artist Series, which is supported by the University of Mississippi and in collaboration with the Center for the Study of Southern Culture and The Center for Inclusion and Cross Cultural Engagement. Tickets are available here.

Join us for a unique look at the impact punk and hardcore music has had on the American South through video presentations of first-person oral history interviews conducted by Southern Studies graduate students. The event will conclude with a live performance from New Orleans-based punk/ska band Joystick! who have spent the past 13 years making music as part of this community. This event is free and open to the public.

From the banks of the mighty Mississippi, Joystick! doesn’t merely play ska and punk – they inhabit it. Built on laser tight rhythms, infectious vocals, and a fierce brass section, Joystick! calls up the spirit of 90’s ska/punk while still retaining a strong sense of their New Orleans roots, creating a unique sound all their own.

The band began in 2008 and in 2014 Joystick! released their much anticipated second and third albums and were brought to new heights with exposure on college radio stations all over the east coast. The band’s momentum continued to grow, allowing them to play sold out shows at much larger venues and festivals around North America. In late 2016 Joystick finished recording their most ambitious album to date proving once and for all that they are unstoppable and show no signs of slowing down. They are set to release their fourth studio album “I Can’t Take it Anymore” on April 16 in collaboration with Bad Time Records and Stomp Records. Their first new album in four years has the band at the very top of their game, playing their most aggressive, fun, and introspective brand of ska punk to date. The grit and musical mixture on the record might be purely New Orleans, but the consistent themes of redemption, recovery, and getting your kicks while you can are universal. As with other bands in the New Tone ska movement, they proves that ska punk can simultaneously be a raucous party and a moment of self-reflection, while never needing to slow down enough to figure out which is which. “I Can’t Take it Anymore” ducks and dives between breakneck hardcore, anthemic punk rock ballads, and dancehall smashing ska, and will be right at home with fans of Mustard Plug, PEARS, Kill Lincoln, and Big D & The Kids Table. 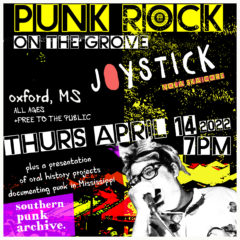